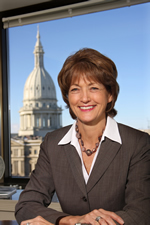 Joan Bauer '71 is State Representative for the 68th House district of Michigan which includes Lansing, the area in which she has spent most of her life. Her father grew up in Kalamazoo and her grandmother, who passed away at 107 years of age, also lived here.

Representative Bauer began her university studies at Western Michigan University in 1968 and graduated in 1971 with a major in history. WMU clearly prepared her for later life. In addition to her degree, she participated in student government, was president of her dorm—Draper Hall—and worked with many other campus groups. Attending WMU at a time of much social change she recalled anti-war marches, peace rallies, and civil rights demonstrations on campus. "These events and my classes,” she notes, “changed me forever and helped mold my political philosophy and values.”

Bauer had a varied career before running for public office. She taught government in high school and in adult education classes, worked as the director of women's programs at the YMCA and served as director of the Lansing Community College Foundation. She was, as well, director of volunteer services at Ingham Regional Medical Center.