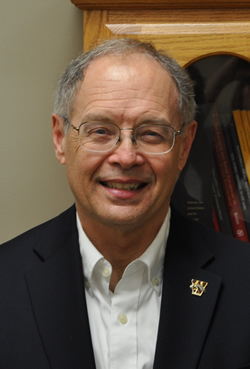 Charles E. Binder, Esq., is a retired United States Magistrate Judge who served on the United States District Court for the Eastern District of Michigan.

Charles Binder earned a B.A. degree in history from Western Michigan University and the Lee Honors College in 1971 and went on to earn his J.D. degree from the Duke University School of Law in 1974.

He began his career as a law clerk to U.S. District Judge Wendell A. Miles. He practiced law for private firms in Grand Rapids and Bay City from 1976-84, before he was appointed a United States Magistrate Judge. He was appointed to this position on part-time status in February of 1984 and began full-time service in October of that same year. He served until his retirement in April, 2014.

Judge Binder is a member of the Federal Magistrate Judges Association and the Bay County and Federal Bar Associations. He served in the Michigan Air National Guard from 1982-94, and the U.S. Air Force Reserve from 1994 to 2004. From 1998 to 2010 he was a visiting faculty member in the Department of Law at the United States Air Force Academy. In 2007 he was awarded the “Guardian of Justice” award in recognition of his work in upholding Civil Rights.

He has served in a number of capacities on the WMU Alumni Association Board of Directors, from 2007-13. He serves as co-chair of the Department of History's advisory council and was instrumental in initiating the Sherwood Cordier Endowment Fund. The latter sits at 73 percent of completion in large part due to Charles’s efforts and generosity. He is the proud father of two daughters, both of whom have received degrees from WMU. His daughter Katherine attended WMU’s Lee Honor’s College and graduated with an M.A. from the Department of Psychology in 2012. She is pursuing her Ph.D. in behavioral psychology at WMU. His daughter Carolyn received a B.A. in communication and is employed in the Kalamazoo area.

He is an avid pilot and member of Valley Aero Club. In addition to his other interests, he is helping the club rejuvenate the James Clements Airport in Bay City, Michigan. He serves as secretary and flies for Wings of Mercy East Michigan, an organization that helps people improve their chances of getting well by facilitating free flights to some of the best medical destinations east of the Rocky Mountains.