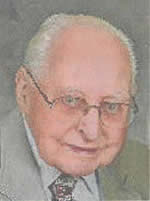 Dr. Brunhumer passed away on March 15, 2018 in Prescott, AZ. Walter was born in New York City in 1926 to Austrian immigrants Frank and Anna (Jedinger) Brunhumer. The family moved to Milwaukee when he was three where he attended parochial schools and Marquette University until WWII when he enlisted int he Navy and went to OCS. Noting his flair for languages, he was sent to the University of Colorado's Oriental Language Institute for 14 months to learn Japanese. He then served in the Office of Naval Intelligence in Washington, D.C. translating documents for the remainder of the war.  Later he returned to Marquette on the GI Bil to complete requirement for a BA and MA in European history.

Milwaukee has always been "home". Next he enrolled at Northwestern University where he received a PhD in 1954. After teaching two years at Wichita State, He came to Western Michigan University where he was a member of the History Dept faculty for 28 years. retiring as a professor in 1986.  Here he was instrumental in establishing televised lectures, serviced on various levels of committees, and was published in professional journals.  He also met and married in 1966 a local woman, Sondra Hicks, who was a WMU history major and worked in the WMU Waldo Library.

He loved to travel, especially by car and train, was a sports fan of Wisconsin teams and support classical music organizations wherever he lived. Tiring of northern winters he and Sondra relocated to Prescott, AZ in 2000 to enjoy the climate and scenic beauty of the southwest.