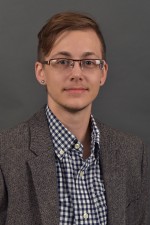 The cold weather months are the perfect time of year to curl up with a mug of coffee and a classic mystery film. This year, Kalamazoo Public Library’s Local History Assistant, Ruth Wilson, was bequeathed with a real-life mystery of her own in the form of two heavy metal cases that had been tucked into a large plastic tote. The case containedthirty films, recorded on 16mm film, datedthroughout the 1950s. The films were of unknown origin but contained short home videos of a 1954 MSU football game, pre-Mackinaw bridge ferry crossings for travelers heading to the Upper Peninsula, footage from a military base, and family holiday celebrations. The only clues to the film’s original owners from the silent films wereshorthand written notations adhered to some of the reels, including the name of a young girl named Gloria Ann. Film stock from the first half of the 20thcentury came in a few different forms, later versions created to alleviate issues such as chemical instability and image turbidity. The unknown origins of Mrs. Wilson’s films, therefore, presented a preservation challenge for the library. Upon contacting the library staff after hearing about the films, I discussed my research on pre-modern film preservation completed inDavid Benac’s Cultural ResourceManagementcourseat WMU, and I was able to organize a meeting to examine the reels. My inspectiondetermined that the films were recorded on safety acetate film (which did not have the risk of spontaneous combustion associated with nitrate film stock), but that the films required a different storage container than what they had been delivered in. To prevent damage to the reels, each would have to be laid flat (like a pancake) and kept in refrigerated storage to slow the onset of vinegar acetate syndrome.(The decay of these materials gives of a signature smell, which was also affecting the library’s microfilm collection.) A mysterious white powder on some of the reels was also identified as mildew, and the items werequarantined. Most interestingly, I also discovered a notation on the case during my examination that identified the owners.Since our meeting, Mrs. Wilson has been able to confirm that the films belong to Gloria Tiller of Kazoo Books. She identified herself as the young Gloria Ann celebrating the holidays in one of the reels and her father in Manilla filming in the immediate aftermath of WWII. She has collected her films and is having them converted to a digital format before returning them to the library, where further images will be captured as a part of KPL’s local history archive.