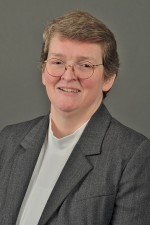 Dr. Sally Hadden is an associate professor in the Department of History at Western Michigan University.

Hadden writes about and researches law and history in early America. She has published one monograph as a solo author: Slave Patrols: Law and Violence in Virginia and the Carolinas (Harvard University Press, 2001).

She has co-edited or co-authored three additional books:

She is working on two projects: a monograph on eighteenth-century lawyers in colonial American cities, and a study of the earliest U.S. Supreme Court (with Maeva Marcus, under contract with Cambridge University Press).

Hadden teaches general education and upper level undergraduate courses on modern American history on topics ranging from legal history and colonial America to research methods and the Civil War. She leads readings and research seminars for graduate students, in addition to teaching historiography from time to time. Her graduate students have completed theses in a number of areas, including the history of the book, the early American navy, religion and the Northwest Ordinance, and studies of territorial Florida and Michigan.

In 2017, she was interviewed for the video Preserved Identity about an artifact located at the National Museum of African American History and Culture (Washington DC).