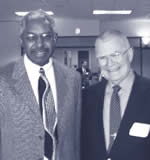 Dr. Howard Odell Lindsey spent his youth in the small rural community of Covert, in southwest Michigan. After graduating from Covert High School in 1964, he followed the example of many of his teachers and enrolled at Western Michigan University. Describing his undergraduate years as “a time of political, social and racial upheaval,” he said that he hoped to be able to use history, his major field of study, as a “weapon of truth,” and he has indeed done this in a fruitful career as an educator and an engaged citizen.

After graduation from WMU in 1968, Howard pursued graduate study at the University of Michigan where he earned a Masters in 1970. He accepted a position at Highland Park Community College, where he earned the Student Council’s designation of Teacher of the Year in 1974. During the 1980s he served as chair of the Social Science Department. He later continued graduate work at Michigan and earned a Ph.D. in 1993. His dissertation interprets a project of Henry Ford to assist members of a predominantly Black suburb during the Great Depression.

In 1994 Lindsey published a book, A History of Black America. In the 1990s he accepted a position at DePaul University in Chicago, where he currently teaches a wide range of courses, including World Civilization, African American History and American Studies. Between 2000 and 2003 he led the History Department as its chair. Lindsey was a founding member of the Michigan Black Studies Association and the National Council for Black Studies.

He was the sponsor of Nigerian college students in Detroit and has been a mentor for inner-city youth in Chicago. He has lectured widely at the local, regional and national levels, including on programs for PBS and other networks. He is a frequent lecturer for Black History Month. He received a College of Arts and Sciences Alumni Achievement Award on Oct. 13, 2006.