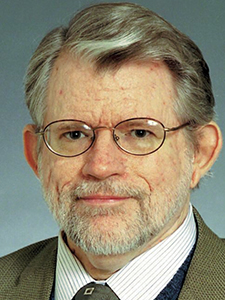 Norman joined the WMU faculty in 1989 and retired in 2017 after 27 years of service to the University. He taught Russian and Soviet history courses as well as courses dealing with cultural history and the arts, specializing in late Tsarist fine arts.

The Fort Worth, Texas, native was instrumental in helping to establish the WMU Department of History's doctoral program. During his career at the University, he was an avid researcher who mentored numerous students and taught his department's graduate-level course on historical methods and theory for more than a decade. Norman was active in the community and frequently shared his expertise. In addition, he was a founding member of the Kalamazoo-Pushkin (Russia) Partnership, which helped collect medicines and other necessities for the elderly in the difficult days of Russia's hyperinflation. He also served as a liaison and interpreter between Kalamazoo and the partnership, as well as the Pushkin city government and the Catherine Palace administration and curatorial staff, during several trips to Russia. Norman earned a bachelor's and master's degree from the University of North Texas and a doctoral degree from Indiana University. He had recently moved from Kalamazoo to Texas.

The rosary will be said at 6 p.m. Thursday, May 3, and visitation follows until 8 p.m. in the Thompson Harveson and Cole Funeral Home and Crematory in Fort Worth, Texas. A Mass of Christian Burial will be celebrated at noon Friday, May 4, in St. Elizabeth Ann Seton Catholic Church in Keller, Texas.