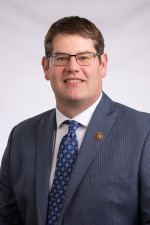 Keith Hahn graduated with a degree in Political Science from the University of Michigan in 1992. He went on to graduate from the University of Toledo College of Law in 1995, serving on the Law Review as Technical Editor. He began his employment as an attorney in private practice specializing in municipal litigation, insurance defense litigation, and general municipal law.

He left private practice and worked in-house for a national insurance company, handling litigated claims and providing advice on policy coverage and obtained the Chartered Property Casualty Underwriter (CPCU) designation while in that position.