It’s more than book smarts. More important than IQ. It’s the pursuit of purpose, daring to think differently, and not being afraid to question answers. We call it Rethink Smart. Are you ready? Western Michigan University’s Department of Marketing is one of the largest marketing programs in the nation. We offer experience-based learning that will prepare you for a successful, meaningful career. Our faculty brings years of practical experience to the classroom and maintains close ties with industries through applied research and consulting.

Learn more about our marketing degrees. 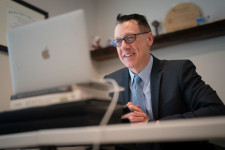 Dr. Russell J. Zwanka, associate professor of marketing, was named director of the food and consumer package goods marketing program in the Haworth College of Business, the premier program of its kind in the country. Appointed to the faculty in August 2020, Zwanka has already shaped the program in significant ways. A talented teacher, mentor and researcher, Zwanka has exciting plans for the program. 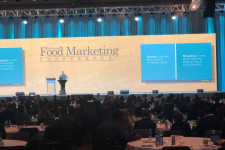 Western's Food Marketing Conference occurs March 22 and 23 and focuses on “Reimagining the Marketplace: Embracing Change and Transformation.” The event, presented in on-demand and in-person formats, boasts presenters such as Indra Nooyi, former chair and CEO, PepsiCo, as well as other industry leaders and speakers on workplace culture. Last year’s event drew more than 1,000 participants, and this year’s lineup promises a great mix of dynamic speakers. 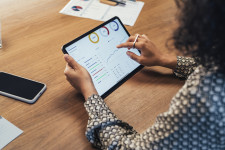 Alumnus and former WMU quarterback Tim Hiller recently scored ownership of the newest Chick-fil-A restaurant in West Michigan. In this interview, he discusses his time as a Business Bronco, an athlete and a new franchise owner for the famous chicken chain.

Janelle Tischer, B.B.A.’00 has dominated the fast-paced advertising industry by working with blue chip brands such as Cadillac, Chevrolet, Sprint and now  Disney. Her most recent accolade was being named the 115th president of Adcraft Detroit, the oldest nonprofit advertising association in the country.

For Elma Celebic, there has been no greater reward than graduating from WMU. Among her successes: An internship with global media company Razorfish that led to a full-time career.

Throughout his time at WMU Haworth, Charles Poole has learned that giving your best effort and fully committing to growth opportunities leads to success.

Meeting disruption with innovation and resilience: The 2021 edition of Business magazine is now available. Read the issue.