Bye, midfielder, went as the No. 8 overall pick to the New England Revolution. Shepherd, goalkeeper, was selected No. 46 overall by the Toronto FC. Prior to this season, WMU had only had one other soccer player drafted in school history. Goalkeeper Eric Pogue was selected 53rd overall by New England in 2001. 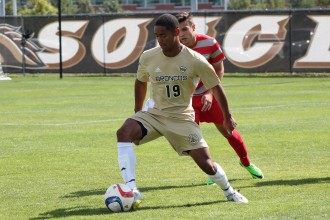 Bye is coming off the most decorated season in WMU history. He was a Hermann Trophy semifinalist, the 2017 Mid-American Conference Player of the Year and named a First Team All-American by the United Soccer Coaches and CollegeSoccerNews. Bye was also honored as the National Scholar Player of the Year by the United Soccer Coaches and was an Academic All-American.

Bye led the MAC with 12 goals and 31 points which also ranked among leaders nationally. His six game-winning goals were seventh most in Division I this season and he set a WMU record with 91 shots. For his career he was a three-time All-MAC selection and totaled 22 goals and 19 assists.

Bye's draft stock rose considerably over the past week after an impressive showing at the MLS Combine, where he worked out primarily as a defender.

A Kalamazoo native, Bye played his prep career at Portage Northern High School and is the son of Bill and Denise Bye. He maintains a 3.74 grade-point average with a double major in food and consumer packaging goods and marketing and supply chain management. 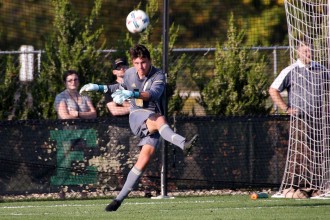 Shepherd had a 16-3-1 record in goal this season, earning Second Team All-America, Academic All-America and First Team All-Mid-American Conference honors. Responsible for 13 of the team's 14 shutouts, he ranked third in Division I for shutouts in 2017. His 0.727 goals-against average ranked 22nd and he was 25th for goalkeeper minutes played.

Shepherd set a new WMU record for goalkeeper single-season wins, 16; single-season shutouts, 13; consecutive shutouts in a season, six; and career shutouts, 29. A four-year starter, Shepherd's career 0.75 goals-against average will also go down as best in school history. He finished with the second most career goalkeeper wins at WMU, totaling a career record of 34-12-10.

As a redshirt sophomore in 2015, Shepherd was the NCAA Division I statistical champion for goals-against average, allowing just four goals in 1101:24 minutes played for a 0.329 GAA. He also finished second among Division I keepers for save percentage at 0.879. He became the first WMU goalkeeper to be named First Team All-MAC.

Born in Denver, Shepherd played his prep career at Huron High School in Ann Arbor, Michigan. He is the son of Andy and Amy Shepherd. He maintains a 3.38 GPA in aviation flight science and has a commercial pilot's license with an instrument rating.

Most successful season in history

WMU won its first ever MAC regular season championship in 2017 and advanced to the Sweet 16 of the NCAA Tournament after defeating UAlbany in the second round. The Broncos, with a 17-4-1 overall record, finished the season ranked No. 9 in the country and were ranked in the top 25 for 11 consecutive weeks. WMU peaked at a No. 4 ranking.