These rare earth oxides are used as tracers to determine which parts of a watershed are eroding. Clockwise from top center: praseodymium, cerium, lanthanum, neodymium, samarium and gadolinium (photo by Peggy Greb, U.S. Department of Agriculture).

KALAMAZOO, Mich.—The Pentagon is quietly racing to track the U.S. output of rare earth minerals amid the ongoing trade dispute with China, Reuters reported in a July 12 story.

But Western Michigan University, home to the Michigan Geological Survey, has already been doing just that. In May, the University began working on a grant its state geological survey received to assess Michigan's potential for supplying some of the 35 minerals the federal government considers vital to the nation's security and economic prosperity.

Items on the list, which includes 15 rare earth minerals, are essential for producing everything from washing machines, energy-efficient light bulbs and smartphones to robots, electric cars and missile systems.

The need for states to conduct a critical minerals assessment became crystal clear earlier this year when the escalating trade war with China resulted in that country increasing tariffs to 25% on rare earth mineral exports to the United States and threatening to stop these shipments altogether.

And America was in a vulnerable position even before the current trade tensions. China temporarily stopped exporting rare earth minerals to Japan in 2010 during a dispute with that country. Plus, China had started imposing trade limits on rare earth exports at the turn of this century, scrapping them only in 2015 after a World Trade Organization ruling.

So, WMU didn't waste any time after a nationwide grant program was announced in the wake of President Donald Trump signing a presidential executive order calling for a federal strategy to ensure a reliable and secure supply of critical minerals. The University applied for a share of the U.S. Geological Survey funds and received the largest amount possible, $35,000.

"We use tons of stuff in our daily lives, and it's all related to technology. But we don't really understand or appreciate where all the things come from that make up that technology," says Dr. William B. Harrison III, principal investigator for the grant.

"I guess we just assume that we have all these different mineral products that we need. And it turns out we don't. They're there, but because other countries have put more emphasis on them, they're developing their resources a little more efficiently than we are."

More than three decades ago, China embarked on a plan to capture the world market for rare earth minerals, in part by imposing few environmental or labor restrictions on mining companies and processors. It mines or processes about 95% of the global supply of rare earth minerals and has an estimated one-third of the world's rare earth reserves.

Meanwhile, the United States has only one rare earth minerals mine, the Mountain Pass Mine in California. Production there has stalled periodically because of closures due to contamination issues and more recently, bankruptcy. And despite reopening in 2018, the mine sends its output to China for final processing.

Harrison shows off a rock core that contains layers of potash, an essential fertilizer component.

Harrison says the United States is rich in geological natural resources, including a lot of the rare earth minerals that have magnetic and optical properties so useful in making electronics more efficient. But it also imports these and other critical minerals.

These exotic-sounding materials, such as germanium, lanthanum and yttrium, actually aren't rare. They just occur in low concentrations and are mixed in with other minerals. That makes them difficult and environmentally challenging to extract. Even though many are used for green technologies, they take huge amounts of water to process and can leave behind tons of toxic waste.

"These kinds of materials are so important to our technology and our everyday activities that we just can't afford not to have them. So the president issued an executive order," Harrison says.

"And now the various state agencies—the Department of the Interior, where the USGS is housed, and the Department of Energy and Department of Commerce—are all working together to develop plans and implement activities and objectives to begin this process of better understanding where our resources are and to maintain relationships with our allies to keep the supply chain going."

MGRRE houses some 550,000 feet of rock cores from around Michigan.

The team will spend the next year cataloging and preserving both unpublished and previously published critical minerals information by digging through materials at the Michigan Geological Repository for Research and Education in WMU's Department of Geological and Environmental Sciences. Harrison founded MGRRE and serves as its director.

Both the repository and department are integral to the Michigan Geological Survey's work, and they have been since the state decided in 2011 to base the survey at WMU. Legislators approved the action primarily because of MGRRE, an archive of rock samples and oil, gas and water well records that constitute Michigan's most comprehensive collection of subsurface geological materials.

As part of the USGS assessment grant, WMU will make its findings available to the public as well as private companies.

The same will be true for a related grant from USGS that Yellich says the Michigan Geological Survey expects to be awarded later this summer. If the new funding comes through, WMU will partner with Michigan Technological University and map a 110-square-mile area of Dickinson County to confirm the geology of Michigan's Upper Peninsula.

Yellich, who is vice president of the American Association of State Geologists, says critical minerals were the focus of several presentations at the association's national meeting June 9-13.

"At the meeting," Yellich says, "USGS Director James Reilly also reinforced the collaborative benefits of the state geological surveys and the USGS to accomplish the immediate task of assessing the nation's geologic environments for rare earth elements and critical minerals."

In addition to enhancing the nation's security and prosperity, Harrison notes that the ongoing assessment grant is beneficial for Michigan and for WMU students.

"We think it has upside potential for economic development. One way that you can generate new wealth in any region is to extract some new resources out of the ground. That would build the economy up and create jobs," he says.

"And a lot of students will be helping to assemble and scan publications, assemble geospatial data, and prepare maps. I know many students question what they're going to get with their degrees. But WMU students who do these kinds of studies have some skill sets that industry really wants to have. So from a student training standpoint, this is really valuable practical experience and one that lets them make an important contribution to the state and nation." 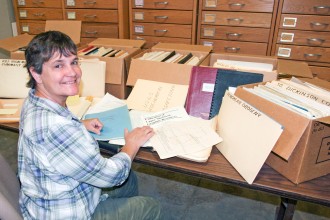 Trout sorts through some of the  materials WMU has received from the state.

When it comes to contributions, one research team member already has made a startling discovery. Natural graphite, a designated critical mineral, can be found in the Upper Peninsula's Baraga County.

"There's about a 30-mile stretch of graphite, and it's in a narrow belt. It was mined in 1911 and 1912 by a couple of different companies in open pit mines. And interestingly enough, there's a creek that runs real close by there called Plumbago, which is another word for graphite," she says.

"Graphite was mentioned in the first box that I pulled. I don't know what else we're going to find. A lot of these documents that I've been going through are not published anywhere. So this project will really help us get information back out to the public."

Team member Voice, an expert on Michigan's mining history, says the Ford Motor Co. owned quite a bit of the Baraga property and decades ago, used graphite in lubricants and paint. He is spearheading the assessment grant's review of published information about Michigan's critical minerals. What Voice is unearthing is being added to an extensive Michigan Geology bibliography that he previously compiled. It contains some 7,800 references to publications, with about 100 so far dealing with critical minerals.

That database also contains numerous references to potash—potassium chloride—an essential plant nutrient and key ingredient in fertilizer. MGRRE helped rediscover this salt in Michigan several years ago in another forgotten mineral deposit located under West Michigan's Osceola and Mecosta counties. The deposit features the purest and highest-grade potash being produced globally and is in the process of being developed by a commercial firm.

As WMU researchers and the Michigan Geological Survey continue to work on the assessment grant, Harrison says he's hopeful they will collect more information about the potential value of other mineral resources in the state.

"Whatever information is out there, it'll all be put into a big national database that anybody that's interested in exploring for these minerals can access. So, I think it's going to really stimulate private interest and private investment," he says.

"Companies would love to go out and do these kinds of projects, but they don't know what's there and they don't have the time or the resources to really go out and start looking in every state."