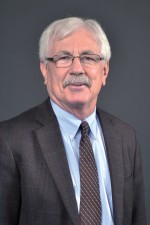 Dr. Ron Kramer is a professor of sociology and former Director of the Criminal Justice Program (1992-2017).

Kramer received his PhD in sociology (specializing in criminology and law) from the Ohio State University in 1978. His research specialties within criminology are corporate and state crime, international law and crime prevention and control strategies. He also does research on the sociological history of the sport of baseball.

Kramer is the co-author of "Crimes of the American Nuclear State: At Home and Abroad" (Northeastern University Press, 1998), "State-Corporate Crime: Wrongdoing at the Intersection of Business and Government" (Rutgers University Press, 2006), and co-editor of "State Crime in the Global Age" (Willan Press, 2010). His new book, "Carbon Criminals, Climate Crimes", which analyzes climate change through the lens of state-corporate crime, will be published by Rutgers University Press in early 2020.

Formerly the Co-Producer and Host of the community access television program "WMU Forum" (1987-1995), Kramer is currently part of the collective that produces the award winning television program "Critical Issues, Alternative Views" which airs on the Public Media Network in Kalamazoo (available on You Tube). He is one of the founding co-chairs of the Working Group on Climate Change at the WMU Center for the Humanities.

In 1981, Kramer was awarded the WMU Alumni Association Teaching Excellence Award. He is also the 2004 recipient of the Lifetime Achievement Award from the American Society of Criminology's Division on Critical Criminology. In 2012 he received the Larry T. Reynolds Award for Outstanding Teaching of Sociology from the Michigan Sociological Association and in 2017 the Charles Horton Cooley Award for Distinguished Scholarship in Sociology, also from the Michigan Sociological Association.