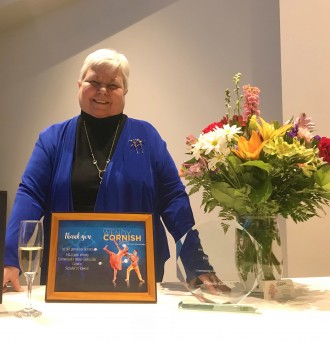 Wendy Cornish -- teacher, choreographer, lighting designer and professor emerita of dance. She devoted her career to the creation and development of the Department of Dance at Western Michigan University.  Wendy died peacefully at her lake home on April 2nd, in the presence of her beloved family after a lengthy illness.

Wendy received her Bachelor’s degree from the University of Michigan and her Master’s from Western Michigan University. After teaching part-time for a semester at Albion College while finishing her degree at U-M, she joined the faculty of the Department of Physical Education for Women at WMU in January 1967. She taught dance classes and also beginning swimming. A former professional figure skater, she offered the first ice skating courses at WMU; they were taught at the outdoor rink downtown on Crosstown Parkway, since there was no maintained ice surface at Western at the time.

In 1972, the College of Fine Arts was created, the Department of Dance was formed, and Wendy’s career became focused on dance alone. She spearheaded the curricular developments which established the first dance major degree at WMU. During her 37 years as a faculty member, she served as department chair from 1979-1988. She had a consulting role in the development of the dance spaces and the Multimedia Room in the Dalton Center on the WMU campus.

Wendy received two outstanding awards for professional service for the American College Dance Festival Association in 1990 and the WMU the College of Fine Arts in 1995. In 1996, she was given the WMU Alumni Association’s Teaching Excellence Award and, in 1997, she was awarded one of the first four named professorships for teaching excellence at WMU: The Helen Frays Professor of Dance.

Collaboration was a significant factor in her work, and she especially cherished her partnerships with Clara Gamble, Ramon Zupko, Robert L. Smith, William Appel, D. Terry Williams, Greg Roehrick, Matt Knewtson, Jon Flegel, Janet Stillwell and Robert Luscombe. She choreographed or served as movement consultant for many music theatre productions:  Man of La Mancha, West Side Story, Cabaret, Guys and Dolls, Kismet, Oklahoma, South Pacific, The Boyfriend, Irma La Douce, Annie Get Your Gun, Gianni Schicchi, Dylan, and Equus for such local venues  as the Kalamazoo Civic Theatre, the New Vic Theatre, the Kalamazoo Youth Theatre, and Western Michigan University. She worked on the production teams for four WMU Theatre/College of Fine Arts events, where she co-produced  Archy and Mehitabel  and created the lighting designs for Angels in America, Metamorphoses, and Ramon Zupko’s Proud Music of the Storm.

She produced Rituals and Dances, a work in eight scenes, which she considered to be her most significant collaboration. Her conception was based on the Newberry Award-winning book, Anpao:  An American Indian Odyssey by Jamake Highwater. Ramon Zupko agreed to compose the music for a faculty pit orchestra; Clara Gamble agreed to co-choreograph it with Wendy; Greg Roehrick designed the sets; Jon Flegel worked with Wendy on the lighting; and  Highwater came to Western to perform as the narrator in the production.

Wendy’s concert choreography for Entrelazar was selected for the 1978 American College Dance Association’s Regional Festival Gala Concert at the Ohio State University, and Transparencies was performed at the Festival of Original Plays in Geneva, Switzerland in 1979. She wrote and co-produced Dance: Origins and Approaches which won the Honors Award, Modern Dance Category, at the 8th Annual Video & Film Festival in NYC 1979.

After her retirement, Wendy was a board member of Partners in Dance (PID), serving as President or Vice President for several years. She particularly enjoyed working on two annual events: the Community Dance Advocacy Award and the Dancing with the WMU/Kazoo Stars fundraiser for dance scholarships.

Memorial Service Information will be determined at a later date to allow everyone to gather in celebration of her amazing life.

IN LIEU OF FLOWERS:   Contributions to the Wendy L. Cornish Endowed Dance Scholarship and/or Hospice Care of Southwest Michigan would be deeply appreciated.