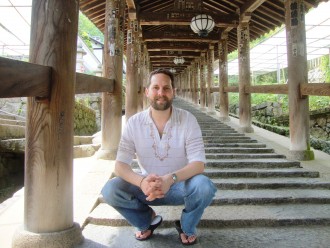 Dr. Jeffrey Angles likes to describe himself as the accidental professor because, unlike many people he knows who planned to become teachers when they completed their educations, he was more focused on the immediate goal of studying Japanese literature and translating. In the process of reading so much, he says that he found himself with a Ph.D. almost before he knew it.

It was a study abroad experience in Japan as a 15-year-old that eventually directed him to a career path that landed Angles at WMU as an associate professor of Japanese literature, language and translation studies in 2004. After serving as head of the University’s Japanese language program for many years, he was the prime architect of the new Japanese major that started at WMU in 2012. He has also served in leadership positions in the Michitoshi Soga Japan Center, including its director (2012-15).

“As a teacher, I would be very bored if I was teaching this stuff and thought it wasn’t making a difference or that I wasn’t connecting with students,” Angles said. “I realize very few students are going to go on and specialize in Japanese literature—it’s not my goal to make scholars of Japanese literature. My goal is to show people that there's this big world out there so intimately connected—full of business, cultural and historical connections. People don’t always realize that understanding the connections between our lives and those of other people makes everyone’s lives richer. When I see students responding to that knowledge, I love it.”

In addition to courses about Japanese cultural history and literature, he also often teaches Japanese 1000. “Students see my face and they realize a non-native speaker can do it,” he said. “It's my belief that in the first semester or two students decide if they will be a Japanese major or minor, so I think it’s important to be enthusiastic and show how many doors learning a language can open up.”

Japanese literature is the focus of Angles’ research, and he has earned international recognition in that field. In recent years, he has received invitations to give special lectures at several universities in the U.S., Japan, Australia, and Germany, and he has participated in conferences in England, Estonia, Slovenia, Canada, and many other places.  Areas of interest include the history of translation and translation theory in Japan, expressions of romance, sexuality, and desire—especially same-sex desire—in Japanese literature, and the development of modern and contemporary Japanese poetry.

In 2009, Angles received the Japan-U.S. Friendship Commission Prize for the Translation of Japanese Literature, and in 2010, he received the Landon Translation Award from the American Academy of Poets. Both of these prizes were for his translation 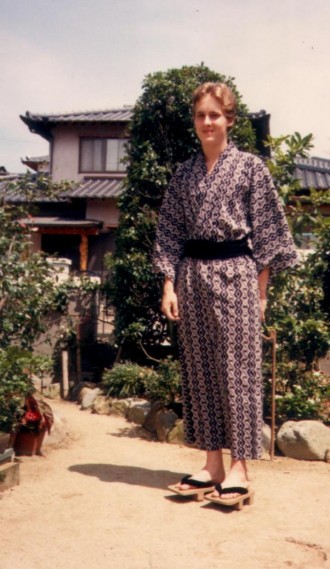 “Forest of Eyes: Selected Poems of Tada Chimako.” Another book of translations, “Killing Kanoko: Selected Poems of Hiromi Itō,” published in 2009 by Action Books, was a finalist in the poetry category of the Best Translated Book Award offered by Three Percent. During the 2009-2010 academic year, he served as a visiting professor to conduct a major research project on the cultural history of translation in Japan by invitation of the International Research Center for Japanese Studies in Kyoto, and in 2011, he was a visiting professor at the prestigious University of Tokyo.

Angles has won grants from the National Endowment for the Arts and the PEN American Center for his translation of the memoirs of the contemporary poet Mutsuo Takahashi entitled “Twelve Views from the Distance” (University of Minnesota Press, 2012). In 2008, he was invited to the Kennedy Center in Washington D.C. to serve as the curator for the literary events in the Japan: Culture+Hyperculture Festival. He has also been interviewed on NPR’s “All Things Considered” about the short story collection “Japan: A Traveler’s Literary Companion,” (Whereabouts Press, 2006) which he co-edited with J. Thomas Rimer.

Angles’ most recent translation is of an experimental novel called “The Book of the Dead” by the novelist, poet, and scholar Shinobu Orikuchi, which will be published by University of Minnesota Press in fall 2016. Angles comments that this book is an important classic of modern Japanese literature, but producing a translation and his own original commentary for it was one of the most difficult things that he has ever done—more difficult even than producing his own original research monograph, “Writing the Love of Boys,” which he published in 2011.

“‘The Book of the Dead,’ first published in 1939, is written in an avant-garde, fragmentary style that reflects mid-twentieth century experiments in storytelling; however, the action of the novel itself takes place in the year 763, almost twelve hundred years before.”  In working on the book, Angles said he had read so many books about the court, politics, life, customs, myths, and religious beliefs of ancient Japan that the bibliography which accompanies his translation and commentary grew to eleven pages long. “The reason this is an important novel is that the author makes a number of implicit parallels between the early origins of the Japanese nation in the eighth century and the creation of the Japanese empire during World War II.  In other words, the author is using the past to make comments about his own moment in time.”

Translations involve a strange kind of torturous love, says Angles. He said it takes a long time to do one well because the translator needs to produce the translation with the same aesthetic impression as the original manuscript. That is not always easy, especially when languages are as radically different as Japanese and English. Translating Orikuchi was a multi-year project Angles, which he completed only by stealing many, tiny increments of a half hour or more of uninterrupted time away from his many other responsibilities to his department and the Soga Japan Center.

“I sat in a room with my dictionaries, a bunch of books about ancient Japan, the Internet, Microsoft Word and my computer,” he said. “This particular translation and commentary were especially challenging because Orikuchi filled the book with ancient turns-of-phrase, concepts, and ideas that are unfamiliar even to contemporary Japanese readers. Often I would ask a native speaker his or her opinion about a passage, only to hear them say, ‘I don’t have a clue what that means.’ Plus, the author’s experiments in style meant that it was incredibly difficult to get the right tone.  One of my Japanese colleagues commented to me that he looked forward to reading my annotated translation since it would probably be easier to understand than the original Japanese.”

Angles said translating and researching literature offers a way to learn about a culture from the inside—to hear what people are saying about their country, its history and their experiences. “Literature is one of the most important artifacts of cultural history,” he said. “In fact, I consider myself a cultural historian more than a scholar of literature.” 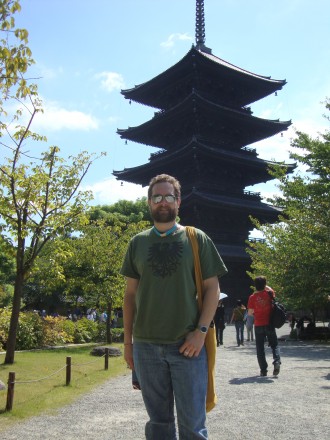 Much has been written about Japanese prose, but Angles said there has been relatively little translation of and research conducted on Japanese poetry—a genre that is so popular that almost all newspapers, from the local to the national level, feature a poetry column.

“My interest in Japanese poetry has emerged in recent years,” he said. “Through the course of my research I realized that poetry is the least studied genre of writing in Japan. I thought that was a problem because people in Japan read a lot of poetry. It’s an important mode of self-expression.”

Most recently, Angles’ studies in Japanese poetry led him to write a book looking at poetry written in response to the 2011 earthquake, tsunami, and nuclear meltdown. “There was a huge wave of poetry written in response to the disasters. I thought it was important to look at that poetry to see the various kinds of emotional and intellectual responses the nation was producing.” In fact, Angles was in Japan at the time of the disasters, and the horror of the earthquake left him feeling depressed long after his return to Michigan.  He comments that producing his book, “These Things Here and Now: Poetic Responses to the March 11, 2011 Disasters,” which will be published by Josai University Press this year, was a way for him to deal with his own complex feelings about living through the crisis. On the fifth anniversary of the disasters, a symposium will be held in Tokyo to celebrate the publication the book, and Angles will be one of the keynote speakers.

Despite that foray into contemporary writing, much of Angles’ scholarship is on expressions of ideology in the modernist Japanese literature of the 1920s and 1930s, when Japan had attained status as a “modern society” and had become as powerful as some of the European nations.

“Japan had turned into an adult nation and was wondering what are we doing? Who are we? It was an incredibly interesting time,” he said. “People were thinking about all sorts of things—what kind of nation they wanted to become, how they wanted to live, what emphasis they should place on human rights, what role women should play in society. They were rethinking everything about their society. Literature from that period is so interesting and provocative; it gives you tons to talk about.”

Another key research interest for Angles is the representation of same-sex desire in Japanese literature, which was prompted in his college years when there was an ever-increasing amount of scholarly interest in studying the history of how people think about relationships between members of the same sex.

Angles earned his Ph.D. in 2004 with a dissertation about representations of male homoeroticism in the literature of Kaita Murayama and the popular writer Ranpo Edogawa. This is the basis for his book, “Writing the Love of Boys,” published in 2011 by University of Minnesota Press.

From the relatively flat topography of his boyhood home in Columbus, Ohio, Angles traveled for the first time to mountainous Japan when he was 15 as a high school foreign exchange student. He lived for three months in the small, southwestern Japanese city of Shimonoseki in Yamaguchi Prefecture.

“I traveled to rural southwest Japan…I'd been to the ocean twice, but I was sent to a small port town with lots of fisherman, and I stayed there where the mountains practically rise out of the sea—it was incredibly dramatic and beautiful,” he said. “The 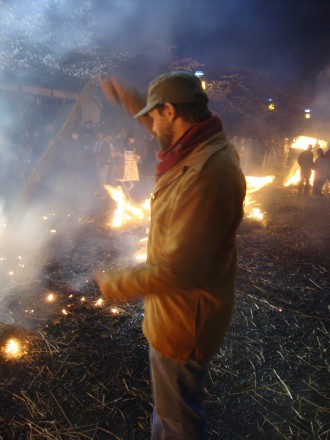 landscape was amazing. As I fell in love with my surroundings, I knew without a doubt that I wanted to be successful at reading and writing Japanese. I knew I had to come back.”

He found every reason to travel back to Japan, including working as an intern at a car parts company and a coordinator for international relations in a local government office. Upon his return to the U.S., he was hired by another Japanese company, which helped Angles realize that working in the business world was not exactly what he wanted to do.

“I thought about going to work with the State Department, but decided against it,” he said. “So, I decided on a whim to attend graduate school and I was accepted at Ohio State with a full fellowship. That was the same place where I had earned my bachelor’s degree in Japanese and international studies.” He completed a master’s degree in Japanese literature in 1997 and his Ph.D. in 2004.

Angles was also co-author of a recent grant application to the Japan Foundation’s Institutional Project Support Program with colleague, Dr. Stephen Covell, professor of comparative religion, which netted a $140,000 award to enhance Japanese studies at WMU. The University was one of just eight institutions nationwide selected to receive a share of the nearly $2 million awarded by the foundation for its 2011-12 award cycle. The grant also help fund a regional outreach coordinator position for the Japan Studies Program, as well as a faculty position and workshops each year. Those initiatives already receive major support from the university's Diether H. Haenicke Institute for Global Education and College of Arts and Sciences.