Celebrating the Power of Reading: Sculpting in Nigeria

Creating sculptures in Nigeria that celebrate the power of reading by individuals and as a family activity is the focus of a Fulbright project that Western Michigan University Professor Emeritus Albert LaVergne will begin in August 2016.

WMU Sculptor Albert LaVergne working in Nigeria on "The Gift."

LaVergne will design a massive sculpture—in public view—titled, “Celebrating the Power of Reading." He also plans to build a fabricated steel composition depicting an over-life-sized family unit engaging in reading activities, to illustrate that reading stimulates growth. He will also instruct Nigerian students on the technical skills and safety practices of his unique metal fabrication techniques.

This is LaVargne’s second Fulbright award to make art in Nigeria. With his first award in 2012, LaVergne designed and built a 14-foot fabricated steel sculpture entitled, “The Gift.” It depicts a mother reaching up to retrieve a child, like a gift, from Heaven and was presented as a gift from the United States to commemorate the University of Ibadan’s 50th anniversary. The sculpture also celebrates the successful cross-cultural collaboration between an African American sculptor—LaVergne—and the Yoruba traditional style of sculpture. The Yoruba are an ethnic group in Western Africa, particularly in Nigeria, who are responsible for one of the most prolific and finest artistic traditions in Africa. The piece is installed in front of the University of Ibadan’s Museum of Natural History.

“The Fulbright projects have helped me create a strong connection between WMU and the University of Ibadan,” LaVergne said. “My style infuses an American improvisational artistic style with that of the Nigerian artistic tradition that tends to be focused on the preservation of tradition.”

LaVergne grew up in rural Louisiana; as the son of a sharecropper, LaVergne developed practical and unique skills. “We had a large family and my father demanded that we all develop skills,” he said. “Along with farming skills, we were expected to maintain and make repairs on some equipment and tools and in some cases we had to invent tools. It was necessary for me to develop hand and eye coordination at an early age.”

LaVergne working on "The Gift."

In his free time as a child, LaVergne said, “my brothers and I would pass the time and amuse ourselves by digging up red clay and building small models of farm animals.” His mother and sisters were responsible for making the family’s clothes and reconstituting old clothes into blankets. “On occasions, I would be allowed to accompany my father to the local blacksmith shop and have equipment sharpened. These informative years were the foundation of my process later as an artist.” 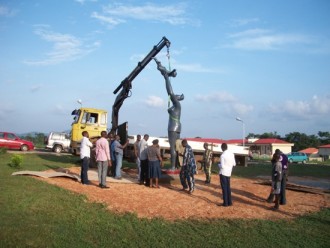 Installation of "The Gift" on the campus of the University of Ibadan.

LaVergne began sculpting metals as a graduate student at University of California-Berkeley, where he discovered he enjoyed working in large scale, which required a medium more durable than clay or wood. Unfortunately, some of his early pieces were destroyed because they were not durable enough to be moved for exhibit. So, LaVergne began a search for a new method and medium.

“Bronze casting was too expensive and did not allow for improvisation during the process,” he said. “I wanted the freedom to revise my concepts whenever the notion arrived. I soon discovered that once I had developed basic welding skills, any shape could be built. This was an epiphany and the beginning of my vocabulary.”

As an African American, LaVergne says he has always felt a “strong connection on some level” to Africa. His work is rekindling the lost connection between his American roots and African roots by looking to the past and the future to create something new for both societies. The large-format style of his art and the development of pieces in public areas lends to the raising of awareness and conversation about big ideas.

For more information about Professor Albert LaVergne visit his website.