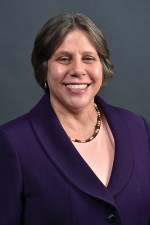 Dr. Linda J. Borish is chair of the Department of History with a joint appointment as associate professor of gender and women's studies at Western Michigan University.

Borish’s publications in sport history, women’s and gender history and American Jewish history include Sports in American History: From Colonization to Globalization (Human Kinetics, 2008), with Gerald Gems and Gertrud Pfister, and Lead Editor, The Routledge History of American Sport (Routledge, Fall 2016). She has published numerous book chapters including chapters in Sports in Chicago; Sports and the American Jew; Jews in the Gym: Judaism, Sports, and Athletics; and A Companion to American Sport History, and scholarly articles in the Journal of Sport History, The International Journal of the History of Sport, Rethinking History: The Journal of Theory and Practice, and others. Borish is executive producer/historian of “Jewish Women in American Sport: Settlement Houses to the Olympics,” documentary film (2007), and is a research associate of The Hadassah-Brandeis Institute, Brandeis University. She has earned various fellowships for her research on women and American sport history.

Borish has experience in material culture studies from her work at the Smithsonian’s National Museum of American History. She was awarded the College of Arts and Sciences Diversity and Inclusion Recognition Award for 2019-20.