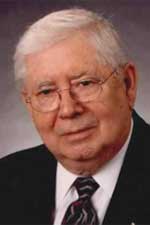 During alumni weekend, October 23-24, 2009, the Department of History at Western Michigan University was pleased to honor Richard Hughey, Sr., a 1952 WMU graduate with a B.A. in history, and this year’s recipient of the Department’s Alumni Achievement Award. In 1957 Hughey received a JD from the University of Michigan. His areas of expertise in the field of law include estate planning and probate, corporate, real estate and foundation law. He retired as president and partner of the law firm of Deming, Hughey, Chapman, Richardson and Bosch, P.C.

He has served the legal profession as a member of the Kalamazoo County Bar Association (of which he was secretary, 1959-60 and president, 1974-75); the State Bar of Michigan; and the American Bar Association. He served his country in the Korean War and attained the rank of captain.

He has devoted a lifetime as a civic leader, serving, for example, on the boards of the Greater Kalamazoo United Way and the Boy Scouts of America. He was president of the Southwest Council of the latter organization for six years. He is chairman of the board of the Irving S. Gilmore Foundation, whose mission is to develop and to enrich the Greater Kalamazoo community and its residents by supporting the work of nonprofit organizations.

Hughey is an engaged alumnus of Western Michigan University. He is a member of the WMU Foundation Board of Trustees and has served on the Haworth College of Business Advisory Council and the WMU Campaign for Excellence organizing committee. Richard was a member of the Alumni Association Board of Directors from 1974-77.  Hughey was a member of the President’s Circle  and a life member of the WMU Alumni Association of which he was once president. In 2008 the WMU Foundation awarded him the status of Director Emeritus. The Department of History would like to thank the entire Hughey family for their ongoing support of Western.