Kaley Shumake with her class meeting with the Dalai Lama. Shumake is in the back row directly next to the Dalai Lama on his left side.

Not many people can say after their first overseas trip that they met someone as famous as the Dalai Lama.

Kaley Shumake, a 2012 graduate of Western Michigan University’s global and international studies program, met the head monk of the Gelug sect of Tibetan Buddhism in a four-week Tibetan mind and body sciences study abroad program in May 2012 offered by Emory University. Half of the program’s curriculum was focused on the mind, medicine and healing and half on Tibetan Buddhist culture.

Shumake stayed in Dharmasala at the Institute of Buddhist Dialect’s Sarah Campus, which is located outside the bustling city center. She lived with monks who were taking western science classes from Emory professors traveling with her group, and she quickly learned what it is like to live where electric and water service are sporadic and air conditioning is non-existent.“It was 125 degrees when we landed at 11 at night,” said Shumake, a native of Grand Rapids, Mich. “We spent one night in Delhi, and then took a 12-hour car ride to Dharmasala on some very bad roads. Once we got into the mountains, it was continual switchbacks at a steep incline, and lots of people got motion sickness.”

Living like a monk was one important lesson Shumake learned. Each day of the program began with a 5:30 a.m. wake-up call followed by an hour of meditation at 6:30 a.m. The group had two-hour classes in the morning and afternoon and held debate sessions with the resident monks on various topics two evenings a week. “We had a lot of interaction with the monks in the classroom and at meals,” she said. “They’d ask us questions about western science and we asked them questions about Buddhism. The courses I took perfectly complemented the studying I did at WMU in political science and religion.”

Her study abroad experience, which was partially funded by a couple scholarships, including the Z.D. Schelling award from WMU’s Department of Political Science, also featured a three-day session taught by the Dalai Lama at the Tibetan Children’s Village. Lectures were presented in Tibetan and translated for Shumake and her fellow students. 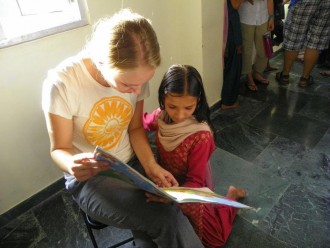 “One of the most important lessons I learned in Dharamsala was that things don't always go as planned, and how important it is to have patience,” she said. “We also had a private audience with the Dalai Lama, who is a huge proponent of compassion and secular ethics, so those are other things I learned a lot about during my program. Meeting His Holiness the Dalai Lama in person was a very powerful experience, which helped me recognize how fortunate I have been in my life and to look forward and consider how I can help improve human rights in the world.”

Shumake graduated from WMU in August 2012 and immediately returned to Dharmasala to teach English at a Tibetan medical school for a few months. She is hoping to land a teaching assistantship for Emory’s spring semester program in Dharmasala, and then return to the United States to enter law or graduate school.

“I was set coming in as a freshman to go into public law, but the global studies major pointed me to international law,” she said. “I am currently applying to Emory and Columbia to focus on Tibetan studies. I hope to get involved in improving conditions for Tibetans in regards to human rights. My goal is to work for the U.S. State Department in Tibetan relations, or something along that line working for the United Nations, to help people gain basic human rights and ensure observance of policies related to the Geneva Conventions.”