KALAMAZOO, Mich.—Fame. Fortune. Family. People go to college looking for a path to success. Chances are, based on a survey of recent graduates, students will find what they're looking for at Western Michigan University. 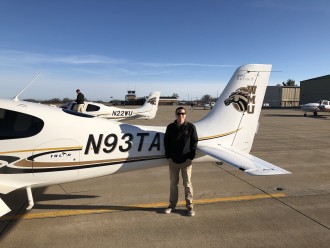 "We pride ourselves on being a school of opportunity," says Logan Brown, who will work as a flight instructor after graduation as he pursues his dream of becoming a commercial airline pilot. "I believe my experiences are a testament to the fact that if you seek out opportunities, work to improve yourself, and work to improve this University, you can accomplish more in your four years here than you ever imagined was possible."

According to the most recent Post-Graduation Activity Survey and Report, compiled by WMU Career and Student Employment Services, 91% of 2017-18 graduates who responded were actively engaged within months of earning a WMU degree. Nearly three-fourths of them were working full time, while others secured part-time work, chose to continue their education or joined the military.

"While it's important to look at the high engagement rate, what I think is even more important are the success stories behind the number," says Dr. Ewa Urban, associate director of assessment for Career and Student Employment Services. "It's the passion, interest and ability behind what those students end up doing that's the most impactful part of this survey."

According to the survey, Broncos are making an impact at such large companies and organizations as General Motors, Delta Airlines, American Red Cross and Kellogg Corporation; and 76% of the graduates secured jobs in Michigan.

The survey also focuses on student experiences and professional relationships they developed during their time at WMU that helped put them on the path to success. Nearly every person who responded to the survey—98%—said they had at least one professor who made them excited about learning, and 90% said their education and experiences at WMU prepared them for their profession.

Urban recently started compiling success stories from graduating students and featuring them in Bronco Spotlights. She encourages all graduates to contribute.

Several students graduating April 27 have already secured interesting and impactful jobs in their fields of study. Click on their names under the pictures below to read more about their exciting future plans.