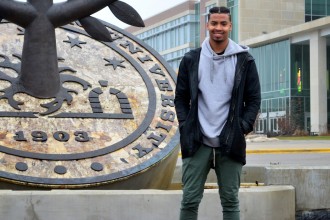 EnRico Montalvo, a senior with double majors in Spanish and exercise science, received a Gilman Scholarship to study in Buenos Aires, Argentina. Montalvo is among 926 undergraduate awardees out of more than 2,800 U.S. applicants to receive a Gilman Scholarship for the spring 2017 semester.

The program has been successful in supporting students who have been historically underrepresented in education abroad, including first-generation college students, ethnic minority students, and students who have disabilities, are from U.S. states with low study abroad participation, and are studying in science, technology, engineering and mathematics—STEM—fields.

Montalvo, who is a Kalamazoo native and plans to graduate from WMU in June, has selected major programs of study that reflect two significant personal interests he has factored into his career plans.

"Exercise and sports are a big part of my life, so exercise science was the right fit for me. Also, I have always had an interest in foreign languages, but my family's Mexican background drove me toward Spanish," he says. "After graduation, I plan on applying to physical therapy school. It's a great way to connect with people and assist them in their time of need."

While studying abroad, Montalvo says he plans to polish his Spanish skills and continue to improve his networking abilities. He also wants to share his experience with others, so he will be keeping in touch with a Spanish class at Loy Norrix High School in Kalamazoo.

"Hopefully," he says, "this will inspire younger students to study abroad and chase their passions."

Montalvo reports that he has always wanted to visit South America and to live in a big city for a while. He adds that he can do both through WMU's Buenos Aires program, while also experiencing a city that has a strong mixture of both European and Latin American influences.

But he says participating in the program may never have been possible without out the Gilman Scholarship.

"When I began my academic career, I never thought I could study abroad due to financial reasons. Receiving the Gilman is a realization that it is possible to accomplish goals which may seem unobtainable at first glance," Montalvo says. "The entire process of applying for and receiving the scholarship taught me that with hard work, you can overcome most obstacles in life."

"The Gilman Scholarship is for students who never thought that studying abroad was within their reach," Metro-Roland says.

Those interested in applying for the scholarship must be federal Pell Grant recipients and should make contacting Metro-Roland their first step. She can be reached at michelle.metro-roland@wmich.edu.