WMU offers new ways for students to get passports

KALAMAZOO, Mich.—Students at Western Michigan University are having an easier time getting passports, particularly if cost has been a barrier in the past.

This fall, the University began awarding a $110 passport scholarship to all students who commit to participating in a study abroad program. Additionally, its Study Abroad office has been selected to host a Council on International Education Exchange Passport Caravan Friday, Sept. 21. 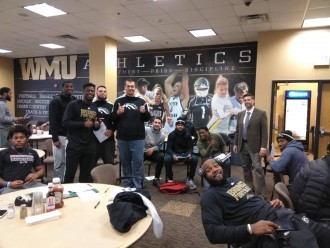 Members of the WMU football team get processed for passports at WMU's Passport Acceptance Facility.

WMU's caravan partnership and new scholarship complement the opening of an on-campus Passport Acceptance Facility in 2016, which made the University only the second higher education institution in Michigan to have such a facility. Members of the campus community as well as the public who are planning international travel may apply for their passports at the site and have the necessary photos taken there.

"We would like to see all students have a passport when they graduate. For many students, though, the cost and hassle of getting a passport can stand in the way," says Paulo Zagalo-Melo, associate provost of the Haenicke Institute for Global Education, which operates the facility. "Working to put passports in the hands of more students is part of our commitment to being a learner centered, discovery driven and globally engaged University."

A U.S. adult passport costs $110, as defined by the U.S. Department of State, and WMU's Passport Acceptance facility charges a $35 processing fee and variable photo fees. However, the University already waives its charges for WMU students, faculty and staff, and now its Study Abroad office is offsetting the passport cost by awarding the $110 scholarship. In addition, although intended to cover the cost of a passport, WMU students who already have this important document will still receive the scholarship.

In order to qualify for the award, students must be enrolled in a program that is a minimum of three credit hours and includes air travel. The scholarship funds appear on their student accounts after committing to a study abroad program that meets the eligibility requirements.

By June, WMU's on-campus Passport Acceptance Facility had processed more than 700 passport applications for people on campus and in the wider community. It is located in the administrative offices of the Haenicke Institute for Global Education in Room 2425 Ellsworth Hall. More information about the passport facility is available online. 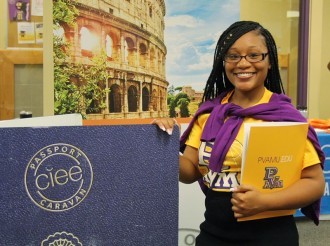 CIEE Passport Caravans aim to provide 10,000 passports to students across the country in efforts to reduce financial barriers to studying abroad.

This initiative seeks to double the number of U.S. students participating in study abroad programs by 2020. Through its caravans, the council aims to provide 10,000 passports to students across the country while at the same time combating such barriers to studying abroad as financial need and lack of exposure to programs.

"Studies show that underrepresented student populations have a belief that study abroad is 'not for someone like me,'" says Lee Penyak, director of WMU Study Abroad. "They think that study abroad opportunities are only meant for traditional students from wealthy families. The Passport Caravan is one way to bust that myth, and show students that these opportunities are for everyone."

The caravan stopping at WMU will provide 100 free passports to underrepresented student populations in various student success programs at the University, including the Seita Scholars and the College Assistance Migrant programs. It also will have facilitators and passport agents on hand to answer questions and process applications.

As of this past May, the caravans had visited some 76 institutions and provided free passports to more than 5,900 students.