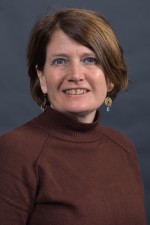 Dr. Jil Larson is an associate professor in the Department of English at Western Michigan University.

She serves on the executive board of WMU's Ethics Center and is vice president of Phi Beta Kappa, Southwest Michigan Association. Larson has published articles on Thomas Hardy, Joseph Conrad, and New Woman writers; book reviews in a variety of publications, including Victorian Studies, where she served as managing editor while at Indiana University; an essay on Thomas Hardy's short fiction in the Dictionary of Literary Biography; and a book, Ethics and Narrative in the English Novel, 1880-1914 (Cambridge University Press, 2001).