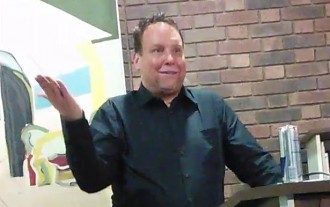 Our dear friend and colleague, Casey McKittrick, died unexpectedly this past summer leaving a hole in the fabric of our English department. He joined our faculty in 2005 with a brand-new Ph.D. from the University of Texas, Austin. In his fourteen short years with us, Casey reminded us through example to be kind to one another, to find humor in quirky situations, to show compassion to those who are oppressed, and to think and write concisely about interesting and difficult topics.

When we remember Casey, we automatically think about film. He especially loved the work of Alfred Hitchcock and published "Hitchcock’s Appetites: The Corpulent Plots of Desire and Dread" with Bloomsbury in 2016. One reviewer described the book as, “A superb appreciation of Hitchcock’s appetites, a brilliant analysis of corporeality in the corpus of Hitchcock films, this exquisitely written and methodologically innovative book satisfies as it induces hunger. McKittrick moves adroitly between Hitchcock’s household meal plans, the archive of his relationships with Hollywood stars and producers, virtuosic readings of the films themselves, the problems of embodiment in queer theory, and the promise of fat studies to write the definitive Hitchcock book for our times.”

Perhaps he will most be remembered as a gifted and passionate professor of English. In addition to teaching large lecture sections of Film Interpretation, McKittrick also focused on African American literature. He taught seminars on the films of Hitchcock and the literary genius of Toni Morrison. In both his film and literature courses, he emphasized interracial and intercultural awareness with the goal of improved understanding. His students responded with comments like, “Your past and future students will be forever thankful!” and “You have changed me.”

McKittrick earned his bachelor’s degree from Rice University in 1995. His master’s thesis at the University of Texas, Austin (1999) was titled Our Future is Child’s Play: The Pedagogical Lesson in Zero Patience and Taxi Zum Klo, and was followed in 2005 by his dissertation on Juvenile Desires: The Child as Subject, Object, and Mise-en-Scène in Contemporary American Culture. He was keenly interested in popular culture, Feminist and Queer Theory, Twentieth-Century African-American and other American Literature, among many other topics. He read voraciously and consumed films with the same enthusiasm.

McKittrick's early life was spent in Atlanta. He had a rich literary and musical upbringing. A gifted vocalist, he spent many years, from boyhood through college, singing solos and as a member of many prestigious choral groups. He was the only child of Drs. Douglas and Sandra McKittrick.

He will be remembered by his colleagues for his wit, his keen mind and sweet nature, his gift of friendship to all of us, and for living with grace and courage under difficult circumstances. We think of him daily and miss him deeply.