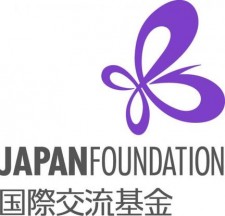 Information on Japanese language courses for the 2018-2019 academic year will be announced shortly. 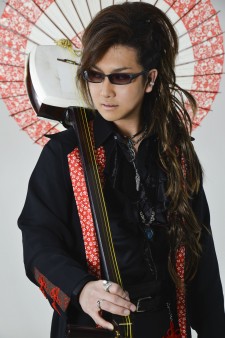 apanese musician to perform on campus during second U.S tour

KALAMAZOO Mich.—On his second U.S. tour, Sato Michiyoshi will perform a unique blend of traditional and modern styles on the "shamisen," a Japanese three-stringed banjo, at 7:30 p.m. Monday, March 12, at Western Michigan University. The free, public event will take place in the University's Dalton Center Lecture Hall on main campus.

Michiyoshi is an award-winning performer of "Tsugaru-jamisen," a dynamic style of music played on the shamisen. In his performance, Michiyoshi will focus on demonstrating the range and flexibility of the instrument. The program will begin with introductory remarks from Dr. Joshua Solomon of Hirosaki University, who will be Sato's interpreter during his tour. Read more.

The JBSD Foundation Grants have been supporting Michigan communities since 1992 and the total amount of grant awards exceeded $2 million this year. The grants also support local college and high school students for study abroad in Japan with scholarships; over 170 students have visited Japan through this support.

The Soga Japan Center will start Japanese language and culture class at the Schoolcraft Community Library in October 2017 for teens in grades 6-12. Classes will meet at 4 p.m. on the following Thursdays: October 26 and November 2, 9, 16 and 30. Classes are free of charge and include refreshments. Call the library at 269-679-5959 to reserve a spot.

Announcing the 2017 National Translation Award Longlists for Poetry and Prose

The American Literary Translators Association (ALTA) listed WMU professor of world languages and literature Dr. Jeffrey Angles' translation of The Book of the Dead by Orikuchi Shinobu on the longlist for the 2017 National Translation Awards (NTA) in Poetry and Prose. The NTA is the only national award for translated fiction, poetry and literary nonfiction that includes a rigorous examination of both the source text and its relation to the finished English work.

Featuring authors writing in 11 different languages, this year’s longlist expands the prize’s dedication to literary diversity in English. The selection criteria includes the quality of the finished English language book and the quality of the translation. The awards will be announced in October at ALTA’s annual conference in Minneapolis, Minnesota.

The five-title shortlist will be announced in August. In the meantime, ALTA will highlight each book on the longlist with features written by the judges on the ALTA blog.

The Soga Japan Center, Haenicke Institute for Global Education, World Languages and Literatures, and University Center for the Humanities had a reading and reception for Dr. Jeffrey Angles to celebrate his winning of the Yomiuri Prize for Literature in poetry. The event was held on Wed, March 1 at the Fetzer Center at WMU. You can see some photos of the event on the Soga Japan Center facebook page. https://www.facebook.com/wmujapanese/

Speech of the dean of Arts and Sciences

Speech of the director of the Soga Japan Center

KALAMAZOO, Mich.--Dr. Jeffrey Angles, Western Michigan University professor of world languages and literatures, was honored during a formal ceremony in Tokyo Feb. 17 as the 2017 winner of the prestigious Yomiuri Prize for Literature in poetry.

Angles won the prize--comparable to America's Pulitzer Prize--for his for his book of Japanese-language poetry "Watashi no hizukehenkōsen" ("My International Date Line"), which was published by Shichōsha in 2016.

The Yomiuri Prize for Literature, now in its 68th year, is given out in six categories each year: poetry, fiction, playwriting, criticism/biography, essays, and research/translation. All books published in the previous calendar year are considered for the award. Angles’ book was, in the eyes of the judges, the best book of poetry published in Japan in 2016.

"This book of poetry taught me that there are special territories that only people who have two languages embedded deeply within themselves can reach," said Natsuki Ikezawa, a prominent Japanese novelist and one of the judges for the award, of Angles' book.

The Yomiuri Prize began in 1949, and like the Pulitzer Prize, is sponsored by a newspaper--the Yomiuri Shimbun, Japan’s best-selling newspaper, which has a circulation of 9 million. Yomiuri winners receive a cash prize and an inkstone, an item that is used in East Asia when writing with a brush. For that reason, the inkstone has come to symbolize the act of writing.

Angles is only one of a handful of non-native speakers ever to win the award, a fact due in large part to the difficulty of mastering the Japanese language. He is the first American ever to win in the poetry category, and his win has led to a great deal of attention.

Announcement of the award drove many writers and commentators to note on social media that the judge’s decision to give the award to Angles for his first book in Japanese was unprecedented.

"I couldn’t be more astounded by all of this," Angles says. "This prize is usually reserved for extremely well- established writers. The list of past winners is like a who’s-who in the world of Japanese literature."

Angles says the book was published in December, but it's sold well enough that it is already going into a second edition. While in Japan for the Yomiuri ceremony, he had the opportunity to visit a large Tokyo bookstore that featured a display with his image and name along with his book.

"Someone even recognized me in the bookstacks,” he says. "I think it was my beard that did it.”

Angles has been interested in the Japanese language since he first traveled to that nation as a 15-year-old. He earned his doctorate in Japanese literature from Ohio State University and has been a faculty member at WMU since 2004.

He says he has loved poetry, and Japanese poetry in particular, for many years, but his interactions with the Japanese poetry world started as a reader, researcher, and translator. He has published a dozen academic books on Japanese literature that include translations and anthologies. He first rose to national attention when his 2010 book of translations "Forest of Eyes: Selected Poems of Tada Chimako" won not one, but two, literary awards in the United States.

His decision to try writing his own poetry in Japanese also came in the year 2010, when he participated in a poetry event in Japan, serving as Japanese-English translator so that four prominent poets from around the world could communicate with each other. Angles wrote his first poem in Japanese at that event, drawing praise from one of the four poets-- Shuntarō Tanikawa, who is one of Japan's most famous poets.

Many of the poems in Angles' Yomiuri Prize-winning book derived their inspiration from his personal life, his experiences flying back and forth across the Pacific, negotiating the differences between two widely differing languages and cultures, his experiences with his family, and his memories of his childhood in Ohio. A number of the poems, he says, veer into the surreal and play with language in ways that bend the usual patterns of the Japanese language in new directions.

He's considering publishing an English-language version of the book.

"Many of the poems play with the sounds and particularities of the Japanese language," he notes, "but a lot of editors I know have been asking me to translate them. My family is asking too, but I think they’re just worried I might have written something about them."

The Soga Japan Center will offer Japanese culture activities for the after school program at El-Sol Elementary, Lincoln Elementary and lunch time club at Northeastern Elementary in Spring semester. These activities are an initiative of the Communities in Schools of Kalamazoo.

Japanese Culture Activities for After School and Lunch Time

The Soga Japan Center offered a Japanese club for an after-school program at Arcadia Elementary in Spring. The center also offered after-school programs at Arcadia Elementary and Northglade Montessori Magnet School and lunch-time club at Northeastern Elementary in Fall. These clubs were an initiative of the Communities in Schools of Kalamazoo. For more information, contact Michiko Yoshimoto at michiko.yoshimoto@wmich.edu or (269) 387-5874.

Special Talk by the Consul-General of Japan in Detroit

Mr. Mitsuhiro Wada visited WMU to give a special talk "U.S.-Japan Relations: An Enduring Partnership" on Thursday, October 13. The talk was held at 3:30 p.m. in Sangren Hall. Mr. Wada had a luncheon with President John Dunn and faculty members of WMU's Japanese studies at The Oaklands before the talk.

Walk in U.S., Talk on Japan

Former Ambassador of Japan, Shuji Shimokoji, and a team of panelists visited WMU to host a stimulating dialogue on regional and global Japan-related issues. This project was sponsored by Japan’s Office of the Prime Minister and was open to campus and the public. This program was held 3 to 5 p.m., Wednesday, March 16 in the Fetzer Center.

Western Michigan University’s Michitoshi Soga Japan Center was one of eight recipients of the 2015 Communities in Schools of Kalamazoo Champs award, which recognizes individual volunteers, teachers and other KPS staff who help the district create successful partnerships. Michiko Yoshimoto, SJC outreach coordinator, and Dr. Stephen Covell, chair of WMU’s Department of Comparative Religions and founding director of the Soga Japan Center, attended the May 19, 2015 ceremony honoring the awardees.

The award recognized the efforts of Yoshimoto, who has been volunteering in the KPS district since 2013 to help students broaden their understanding of Japanese language and culture. Yoshimoto visited district classrooms more than 30 times over the last academic year to give presentations on origami, Japanese calligraphy, using chopsticks, martial arts, mask making, song and dance, as well as giving workshops on basic Japanese greetings and letters.

Yoshimoto came to Western in August 2009 as part of a Japan Outreach Initiative program to promote awareness and understanding of Japan in Michigan. The Soga Japan Center hired Yoshimoto while she was in graduate school to serve as the center’s outreach coordinator—a position that transitioned to full-time in 2014. She completed a master’s degree in socio-cultural studies of education in April 2014.

In her work for the SJC, Yoshimoto is focused on developing and facilitating Japanese culture and language programs for local K-12 schools, libraries, museums, companies, sister-city committees, and other organizations within the state and region. She also maintains the SJC’s network of relationships on and off campus, including serving as the focal point for communications between the SJC and the Battle Creek Japanese Saturday School. 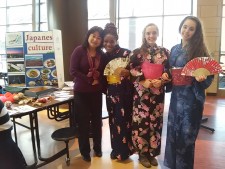 Soga Japan Center participated in the Peace Jam Multicultural Fair hosted at Portage Northern High School on Saturday, March 7. Students and families enjoyed trying on Yukata—Japanese summer clothes, playing with Japanese toys, and receiving a bookmark on which their name was printed in Japanese.

The Soga Japan Center will support an Origami project at Woodward Elementary School planned for Mondays from 10:40 to 2:15 p.m., during students' lunch breaks. Michiko Yoshimoto, SJC outreach coordinator, will teach easy Origami. The program is an initiative of the Communities in Schools of Kalamazoo. For more information, contact Yoshimoto at michiko.yoshimoto@wmich.edu or (269) 387-5874. 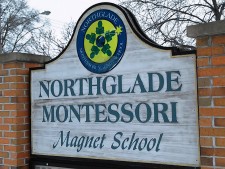 The Soga Japan Center will offer Japanese culture activities for an after-school program at Northglade Montessori Magnet School. The program will be held on Tuesdays from 4:30 to 5 p.m. in March. Michiko Yoshimoto, SJC outreach coordinator and WMU student volunteers will serve as club facilitators. The club is an initiative of the Communities in Schools of Kalamazoo. For more information, contact Yoshimoto at michiko.yoshimoto@wmich.edu or (269) 387-5874.

A Japanese lunchtime club that offers an introduction to Japanese language and culture for first through fifth graders will begin Friday, Feb. 13 at Northeastern Elementary School. The club will meet from 11:20 to 1:15 p.m. in the school's library. Michiko Yoshimoto, outreach coordinator for the University's Soga Japan Center and WMU student volunteers will serve as club facilitators. The club is an initiative of the Communities in Schools of Kalamazoo. For more information, contact Yoshimoto at michiko.yoshimoto@wmich.edu or (269) 387-5874.