History of Physics at WMU 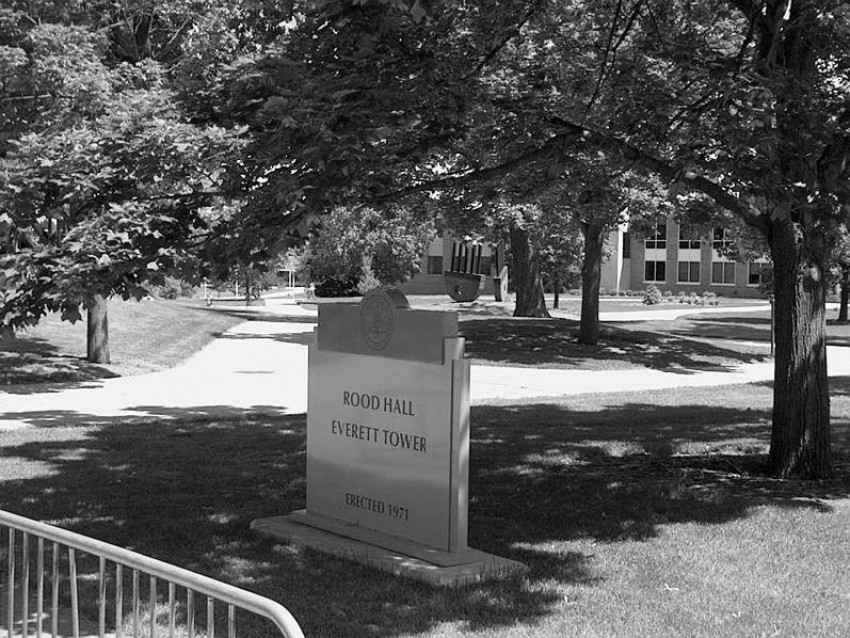 The Western Michigan University Department of Physics traces its history to 1904, when instruction began at what was then Western State Normal School. Physics was taught, along with chemistry, under the auspices of the Science Department in temporary quarters at Kalamazoo High School, and then in East Hall. Physics split with chemistry to form its own department in 1911. By 1915, the department had moved to improved quarters in the new Science Building (West Hall).

A few years later, curricula across campus began to evolve dramatically, from the two- and three-year teaching certificate programs offered since the institution’s inception to longer courses of study. Students began graduating with majors in particular subject areas, including physics, as they do today.

The study of astronomy was part of physics even in these early years. In the 1930s, Western physics students made twice-yearly excursions to lectures and demonstrations at Adler Planetarium in Chicago. Soon, the general public was invited along, and the trips grew so popular that seven train cars were needed to accommodate the group!

The WWII years were critical for the Department of Physics and for the school as a whole, which was by then known as Western Michigan College of Education. Western participated in the V-12 Officer Training Program for the U.S. Navy, which required trainees to take two terms of physics courses.

The 16-week program ran year round with very little time off, and placed a tremendous load on the small department. All told, nearly 1,500 trainees came through physics courses between 1943 and 1945. In appreciation of these efforts, the Navy formally recognized “the splendid service rendered the nation by Western Michigan College of Education during World War II.”

In 1949, the department moved into McCracken Hall, one of the first buildings on West Campus—today the main campus for WMU. For the first time, the department had a large lecture hall that depended entirely on artificial lighting. This meant that with the lights turned off, it was possible to use slides, movies and other modern teaching tools. A small planetarium was set up in a basement storage room for astronomy classes.

It was during this time that a formal seminar series was established, and this weekly colloquia series exists yet today. Outside speakers were often invited to present topics of interest. This era also saw establishment of the first departmental scholarships for outstanding students.

In the early 1950s, when nuclear physics was a relatively young field, physics faculty secured grants from the fledgling Atomic Energy Commission that enabled the department to acquire specialized apparatus and 80 grams of rare, man-made plutonium.

The Cold War and the Space Race created a boom-time in science and technology in the United States. As Western became Michigan’s fourth public university in 1957, the Department of Physics was increasing its emphasis on original research.

By 1958-59, the department had secured grants from the Research Corporation and the National Science Foundation and built a strong relationship with Argonne National Laboratory in Chicago. Department researchers constructed a subcritical nuclear reactor in the basement of McCracken Hall with 6,000 pounds of enriched uranium on loan from the AEC.

Despite the increasing emphasis on research, the department remained committed to excellent teaching for undergraduate students. This may be partly attributed to WMU’s origins as a teacher’s college. But by the 1950s and 60s, more of the credit went to faculty members interested in a new research area: the teaching and learning of physics.

The department received large grants from the NSF to improve physics teaching, and was a pioneer collaborator not only with the NSF, but also with the U.S. Department of Education, the American Physical Society, the American Association of Physics Teachers and the American Institute of Physics—all to improve science preparation in future K-12 teachers.

In the 1960s, the Department of Physics also secured funding to finance new physical science facilities that came with an $8 million price tag—at that time, WMU’s most extensive building project ever. The new buildings—Everett Tower and Rood Hall—became home to mathematics, physics and geology (now geosciences).

A WMU Ph.D. program in physics was approved in 1989, as the department’s traditional areas of research strength in atomic, nuclear and condensed matter physics were augmented and revitalized. Astronomy became an additional area of research with the arrival of new faculty in 1997.

Newcomers among the faculty began receiving substantial start-up funds from the University, and they began to do more work at large research facilities around the world. External support for research increased significantly, along with the number and quality of WMU publications in major journals.

Our dedicated faculty continue to be engaged in the most exciting research in our field, including work with high intensity photon beams, advanced materials analysis and experimental nuclear physics with applications in astrophysics. Our theorists work on strongly correlated quantum systems, atomic structure and reactions. Other faculty continue to make innovations in physics teaching at the secondary and college levels.

Now in its second hundred years, the WMU Department of Physics operates at the forefront of knowledge, making contributions that address the big questions and complex problems that challenge our modern world.