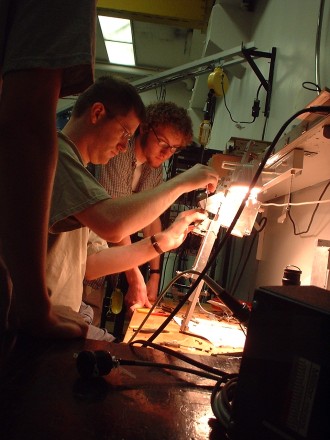 In the study of physics at Western Michigan University, students examine the foundations of the world in which we live, from the very large to the incredibly small.

Physics is concerned with the most fundamental interactions between matter and energy, space and time -- from quarks to the origin and ultimate fate of the universe. Physics also provides the underpinnings of all other sciences. For examples, in physics you may not learn the rate of a specific chemical reaction, but you will learn why chemistry works the way it does. Our understandings of Earth's climate and even those biological processes lie within physics.

Yet despite its extremely broad scope, the study of physics has contributed countless practical applications—critically important tools such as medical imaging devices, as well as everyday items we can’t imagine living without, such as cellular phones, computers and microwave ovens.

Instead of asking, “How is physics used in real life?”, a better question would be “How isn’t physics used?”.

Information about this exciting field of study

National Association of Colleges and Employers
Physics majors at the bachelor's degree level are expected to be the top paid science major in 2016.