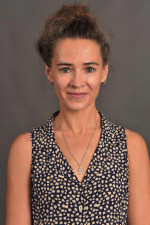 Dr. Elena Litvinova is an associate professor of theoretical nuclear physics in the Department of Physics at Western Michigan University. She is also an adjunct faculty member at Michigan State University.

After receiving her Ph.D., Litvinova became a senior scientist at the Institute of Physics and Power Engineering in Obninsk, Russia. In 2005, she joined the Technical University of Munich as an Alexander von Humboldt fellow, then worked as a research associate at GSI Helmholtzzentrum fur Schwerionenforschung in Darmstadt, Germany from 2007-12. She moved to Michigan State University as a Facility for Rare Isotope Beams Theory Fellow in 2012 and assumed her current roles at WMU and MSU in 2013.