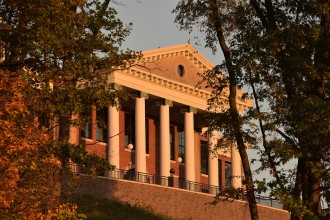 These graduates of our undergraduate, master’s and doctoral programs have been recognized for their outstanding accomplishments with an Alumni Achievement Award by the Western Michigan University College of Arts and Sciences.

Their career paths and achievements are wide-ranging—a testament to the versatility of knowledge acquired in the study of physics.

Please note that the information we provide here was current at the time the awards were received. Detailed biographies are available on the College of Arts and Sciences alumni awards site.

Joan de Vries Kelley (M.A. 1970) taught science, physics and mathematics for 4 years before beginning a long career working at IBM. During her time at IBM, she was promoted to Senior Technical Staff­ Member, the first woman to receive that honor in the performance organization, and was awarded a Corporate Award, the highest level of award given by IBM.

Dr. Vladislav Malyshkin (Ph.D. 1997) is a senior scientist at the Ioffe Physical-Technical Institute in St. Petersburg, Russia. His interests lie in energy generation and accumulation and in the dynamics of stochastic systems. For the past 13 years, Malyshkin has taught physics courses at the St. Petersburg Polytechnical University, where he has been a strong advocate of the importance of international contacts in educating scientists.

Dr. Marc Humphrey (B.S. 1997) manages the Vienna-based International Atomic Energy Agency’s network of analytical laboratories, which assess environmental and nuclear material samples collected by nuclear weapons inspectors. The laboratories are central to the IAEA’s ability to serve as the world’s “nuclear watchdog.” Humphrey has received numerous prestigious awards from the U.S. Department of State, the American Association for the Advancement of Science, the National Academy of Sciences, NASA and Harvard University.

Mr. R. Hugh Van Brimer (B.S. 1952) has been involved in the development, manufacturing, and marketing of ink jet, electro-optical and other high technology products and systems for 35 years. Founder, president and CEO of Trident Industrial Inkjet of Brookfield, Conn., Van Brimer holds many U.S. and foreign patents in the field of ink jet technology and electro-optical instrumentation.

Dr. Robert H. Poel (M.A. 1964, Ph.D. 1970) is an emeritus professor of physics at WMU and remains active in the field of science education and science teacher preparation. He served as co-chair of the Michigan Department of Education's High School Science Education Project and is the co-principle investigator on a project that recently published the middle school textbook, InterActions in Physical Science. At WMU Poel was a member of the Mallinson Institute for Science Education and Director of the Center for Science Education, which provided professional development opportunities for K-12 teachers via summer short courses, workshops and extended programs with school districts. These efforts were supported by funded grants from the National Science Foundation, the Michigan Department of Education and regional and local school districts totaling more than $4 million.

Dr. Ahmad Farhat (Ph.D. 1998) has been extremely successful in improving quality and processes across a wide range of automotive products. Currently a warranty business supervisor in global manufacturing quality for the Ford Motor Company, Farhat’s work involves not only advanced methods in analysis and simulation of complex systems, but also managing very large databases. His work at Ford has also included roles as technical expert in reliability and data analysis, process assurance auditor, and reliability implementation engineer.

Mr. William Sigourney Hough (B.S. 1948) began his wide-ranging career with a stint as a civilian scientist developing guided-missile technology with the Department of Commerce. Later, he served as a member of the Antarctic expedition team of the International Geophysical Year of 1957. He went on to work as a researcher with the federal agency that eventually became the National Oceanic and Atmospheric Association, then spent 15 years as a high school science teacher before becoming a specialist in radiation safety and health physics at a naval shipyard in California. Hough finished his career as a research pioneer in gamma spectroscopic measuring techniques.

Dr. Jim Slusser (B.S. 1977, M.A. 1980) earned his Ph.D. from the University of Alaska in Fairbanks.  He began his career at the Natural Resource Ecology Laboratory as senior research scientist of the UVB Radiation Monitoring and Research Program at Colorado State University in 1996.

Dr. Lawrence Satkowiak (B.S. 1979) has served as program director for Nuclear Nonproliferation Programs at the Oak Ridge National Laboratory since 2002. He is responsible for directing existing programs now funded at the level of more than $150 million annually, and also for managing program strategies and coordinating customer relationships. Satkowiak serves on several national and international committees that seek to safeguard nuclear materials and support the nonproliferation of weapons and weapon technology.

Dr. Michael Khazhinsky (Ph.D. 1997) is principal staff scientist at Freescale Semiconductor, Inc. in Austin, Texas. Previously he worked with Digital DNA laboratories, where he was responsible for TCAD development and NVM process technologies. He has co-authored 26 external papers on ESK, process/device TCAD and photonic crystals and has been a three-time co-recipient of the EOS/ESD Symposium Best Paper Award. Khazhinsky owns two patents on ESD design and has additional patents pending.

Mr. Peter Anderson (B.S. 1980) received a master’s degree in high energy physics at Notre Dame University and is the chair of the science department at Oakland Community College, Highland Park Campus. Anderson has successfully integrated modern equipment and web-based teaching technology into his courses, obtaining significant grant funding to support these efforts. He leads intensive training workshops to help other teachers use these methods, particularly the PASCO microprocessor-based equipment for demonstrations and instructional laboratories.

Dr. J. Thomas Dickinson (B.A. 1963) earned master's and doctoral degrees from the University of Michigan before beginning his career as an assistant professor of physics at Washington State University in 1968. In 2002, he was named the Paul Anderson Distinguished Professor of Physics there. In addition to his teaching responsibilities, Dickinson is the founding director of the Center for Materials Research at WSU. Among many honors, he was elected a Fellow of the American Physical Society in recognition of his innovative research.

Dr. Leo Parpart (B.S. 1980) began his career as the accelerator engineer in the Tandem Van de Graaff Laboratory at WMU. In 1985 he became the accelerator installation engineer for National Electrostatic Corporation, which involved traveling to more than 30 countries to supervise the installation of accelerator systems. He later joined Eaton Corporation as a product support engineer, primarily involved in implementing ion-implanting systems in Europe and Southeast Asia.  Since joining the U.S. Department of State in 1999, Parpart has served as the information management specialist for the U.S. Embassy in Cameroon and as the information processing officer at the U.S. Embassy in Mongolia.