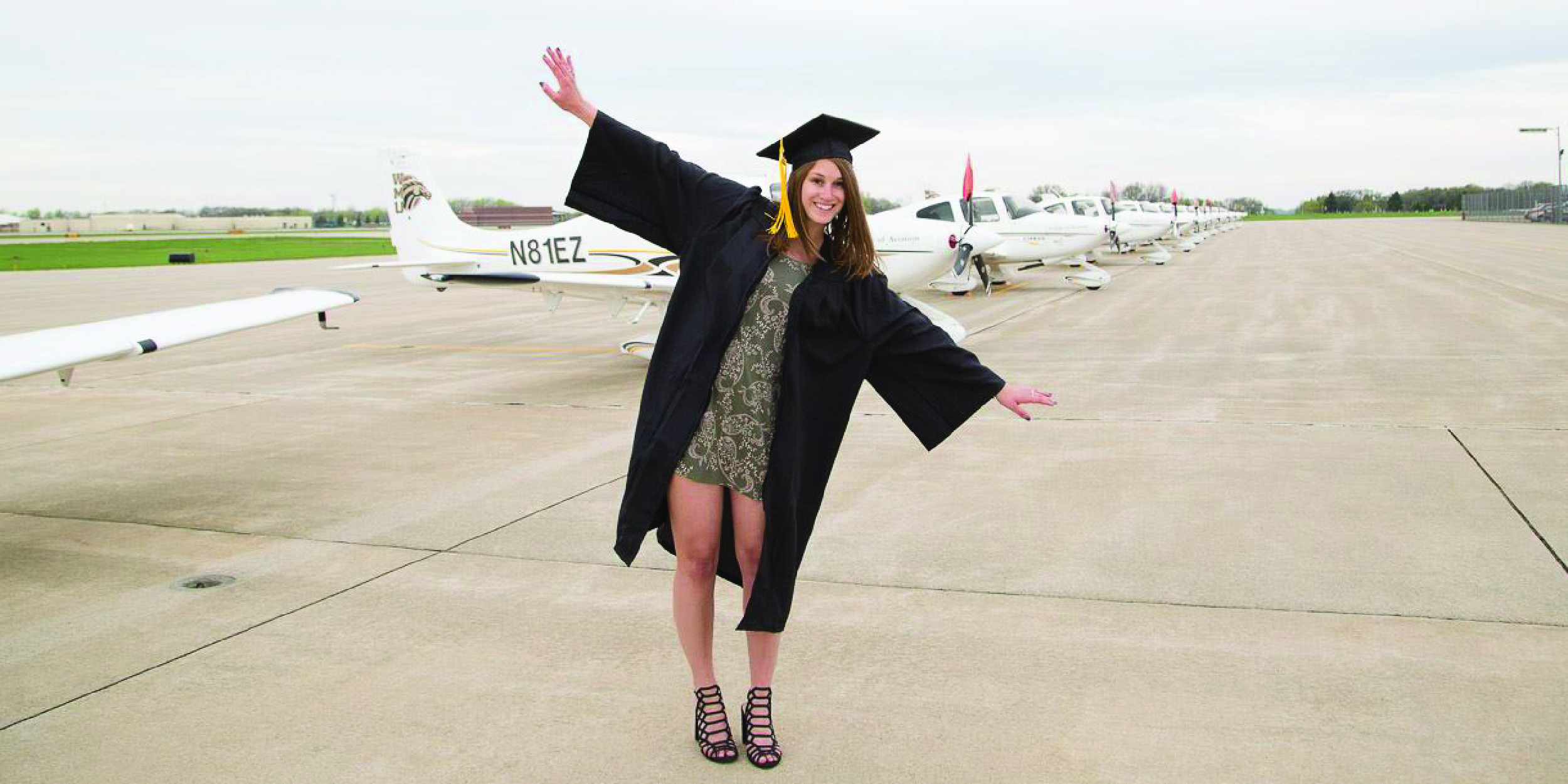 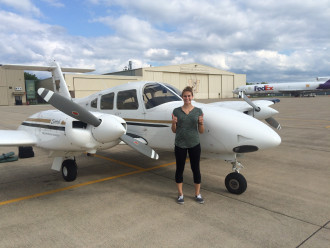 When Maya Thornley was growing up, "Rocky Mountain High" was more than a John Denver song.  For her, it meant flying with her dad in the skies over her home state of Colorado.

Since her 2017 graduation from Western Michigan University with a degree in aviation flight science, she's chalked up a few highs of her own. She was half of a company's first all-female crew that took a Lear 45 from Grand Rapids to Milwaukee to Tampa.

Thornley gravitated to aviation while being raised in Highlands Ranch 12 miles south of Denver. "My dad, Michael, flies recreationally," she says, "so I caught the bug from him.  I grew up tagging along in a Cessna 172 that he rented on weekends.  We would hop to different mountain towns or cities in different states sometimes, and get breakfast or explore for an afternoon."

The word about Western's College of Aviation program gets around because of extensive outreach and recruiting efforts, even as far west as the Rockies.  Thornley brought her 2014 high school diploma with her to Kalamazoo, and has never regretted that decision.

"I loved how friendly and helpful the people were," she says.  "Plus, Kalamazoo is such a fun college town.  I am very fond of the group of life-long friends that I met in the aviation program.  I have countless memories with them." 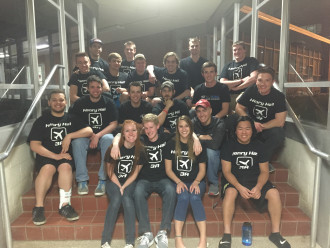 Thornley took advantage of the program's extra-curricular experiences to round out her resume.  She served two years as one of WMU's aviation ambassadors.  She then qualified to be a certified flight instructor the rest of her college career.

Just as important was her affiliation with the Western chapter of Alpha Eta Rho, a co-ed, global fraternity primarily for college students enrolled in aviation programs.  Established in 1929, Alpha Eta Rho promotes linkages between the industry and educational institutions that benefit both parties.

Alpha Eta Rho became a major part of Thornley's total college experience.  She was chapter vice president in the 2015-16 academic year and advanced to president as a senior.  "I learned valuable networking, professionalism, and interview skills that have helped me land jobs," she says.  "I feel comfortable in the professional aviation environment."

While being a WMU instructor was her first official job in aviation, her first out-of-the-Western-loop position -- no doubt assisted by her Alpha Eta Rho days -- was with PROAIR Aviation that was founded in 1996 and located in Paducah, Ky. During her short stint there, Thornley piloted a Citation 7 and Beechjet 400A.

She made "history" of sorts in her next gig -- this one with Northern Jet Management based in Grand Rapids, Mich., with its family of Learjets. In April of 2019, Captain Sara Karsten, also a WMU alumna, and First Officer Maya Thornley constituted the company's first all-female crew, piloting a flight from its Michigan headquarters to Florida, with a trip across Lake Michigan in the middle leg. 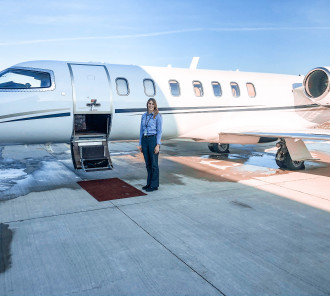 The Colorado native is now affiliated with Aviation Advisor Inc. that has locations Kenosha, Wis., Naples, Fla., and the Chicago area. It specializes in charters, aircraft management, acquisitions, and consulting with enterprises seeking to add an aviation component to their operations.

Thornley credits the College of Aviation's staff for shaping her career, particularly chief instructor Rob Bunday as one who played a key role.  "He put me in contact with my mentor, Mary Poirier," she says.  "Mary helped prepare me for scholarship interviews and looked over my resume."

What is the best thing about her job?

"There are so many great things about my job that it's hard to pick one," she says.  "I love the corporate lifestyle because I often get to stay multiple days in a location to explore.  The actual flying is only a small portion of the time I spend away from home, and I love that every trip is totally different from the last.  I feel like I have seen so many places that I never would have known existed if I had taken a job with an airlines."

Thornley acknowledges she encountered a bit of turbulence on the way to her degree.  She says she "struggled with my instrument rating. That was during my first semester at Western.  I think the adjustment to the college environment as well as learning a new type of flying made it tough.

"But when I became a flight instructor," she says, "I realized that most students struggle with at least one portion of the flight training so I felt better knowing that it wasn't just me.  I was lucky enough to have an incredible instructor who was patient and able to tailor his training techniques to my learning needs." 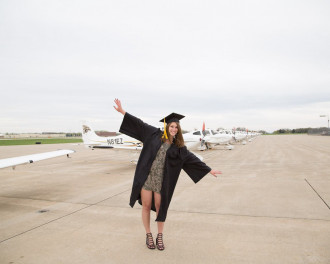 That adjustment was followed by another bit of a shift as she transitioned to being on a payroll other than Western's when she was a certified flight instructor.  "It took some getting used to the lifestyle and reality of being a professional pilot," Thornley says, "especially while most of my friends were still at Western.  At first, spending so much time on the road was draining, but that feeling disappeared when I learned that going on adventures for a living is pretty cool."

Thornley wants to share her enthusiasm for the next generation.  She's joined the Education Committee for the Michigan Business Aviation Association where she continues to refine the association's scholarship process and point students toward corporate aviation.  Falling back on her fraternity days, she's been a speaker at Alpha Eta Rho events describing her career path.

And, full disclosure here, Thornley is not embarrassed to admit that being a pilot brings with it a few perks.  "I am getting tons of hotel points," she says, "which means I can continue going on adventures even when I'm not working."