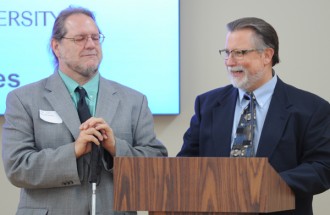 John McMahon, Ph.D. is a distinguished scholar in the field of blindness and low vision studies with over 30 years of experience. After earning his master's in blind rehabilitation, he went on to earn a doctoral degree in interdisciplinary health sciences from WMU in 2013. Since 2007, he has served as the director of agency for the state of Maine's Bureau of Rehabilitation Services within the Division for the Blind and Visually Impaired. His professional history also includes many years as a vision rehabilitation and low vision therapist with the Michigan Commission for the Blind and owning and operating NorthernlightsVisionquest, Inc. from 2004 to 2008.

Notable among his many research and academic contributions is a comprehensive, 25-year study on the performance and attitudes of children with blindness or low vision who have attended sports education camps. In 2014 he was honored with the AER Vision Rehabilitation Therapy Division’s Paul & Susan Ponchillia Publication Award and the Elizabeth Lennon Meritorious Achievement Award. 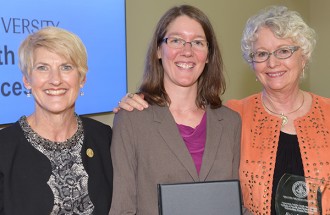 Erin Remster, D.O. received her medical education from Ohio University Heritage College of Osteopathic Medicine in Athens, Ohio. She completed internal medicine residency at East Tennessee State University in Johnson City, Tennessee and received fellowship training in hospice and palliative medicine from Summa Health System in Akron, Ohio. She is board certified in internal medicine and in hospice and palliative medicine.

Dr. Remster joined Genesis HealthCare System in Zanesville, Ohio in 2012 to create a palliative care program there, and she has been the medical director of Genesis Palliative Care Specialists and associate medical director with Genesis Hospice since then. In these roles, she works throughout the community to help patients and families find healing while dealing with serious illness. She sees the specialty of palliative medicine as an ideal model of holistic health care and advocates for individualized care.

Dr. Remster has received many awards and recognitions for her work, including the Genesis HealthCare System Physicians PRIDE award for Professionalism in 2013, the Arnold P. Gold Foundation Humanism and Excellence in Medical Teaching Award in 2011, and the ETSU Caduceus Club Internal Medicine Resident of the Year in 2009. She has published a number of peer reviewed journal articles on a variety of medical topics, and has contributed to a number of medical conferences with her research. 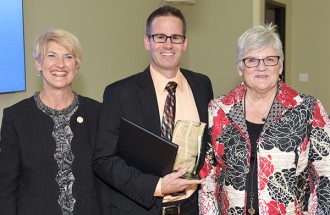 When Michael Shoemaker, D.P.T., Ph.D. earned his doctoral degree in interdisciplinary health sciences from WMU, he added that credential to the doctorate in physical therapy he earned in 1999. He has been an assistant professor with a wide range of teaching responsibilities in health fields at Grand Valley State University since 2008 and has been a physical therapist with Spectrum Health Butterworth’s acute care practice in Grand Rapids, Michigan since 2012. In addition, Dr. Shoemaker has served as an internal rehabilitation services consultant with Spectrum Health Visiting Nurse Association since 2007, and he is certified in advanced cardiac life support with the American Heart Association and as a geriatric clinical specialist with the American Board of Physical Therapy Specialties.

He has published widely on a variety of topics and has been selected to present at American and Michigan Physical Therapy Association conferences and a broad range of other expositions and professional meetings. Currently, Dr. Shoemaker serves as vice president of the Michigan Physical Therapy Association board of directors and volunteers as a physical therapist for individuals with unique therapeutic needs such as brainstem stroke, traumatic brain injury, multiple sclerosis and cerebral palsy. 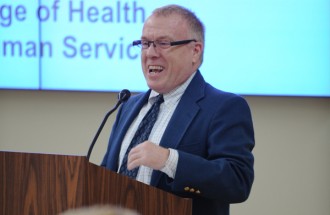 His experience includes a decade as a Lieutenant Colonel in the U.S. Army Reserves at the 2290th U.S. Army Hospital in Washington, D.C. and eight years as director of the Rehabilitation Services Department with that city’s Greater Southeast Healthcare System. Since 2001, he has been employed with the American Occupational Therapy Association, Inc. (AOTA), first as conference and conclave programs manager and as director of conferences since 2009. He has also served as adjunct faculty with the Howard University Department of Occupational Therapy since 2006. Mr. Gainer has presented and published widely on a number of topics, and he counts credentials as a meeting professional and association executive among his many certifications. He joined the AOTA Roster of Fellows in 1997 and was honored as a member of AOTA’s Leaders and Legacies Society in 2015. He is also currently an active member of the American Society of Association Executives, the District of Columbia Occupational Therapy Association and the Congressional Council of the American Occupational Therapy Political Action Committee. 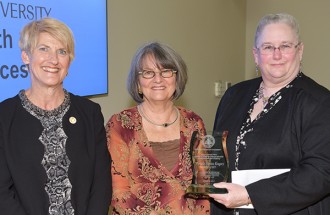 Equipped with a bachelor’s degree, Pamela Blevins Kingery, M.S.W. started her career as a social worker in 1971. She focused on social work administration starting in 1976 as director of case management programs with the Kalamazoo County Community Mental Health Board for ten years. Her master’s in social work degree concentration was policy, planning and administration.

Ms. Kingery then went on to serve as treatment bureau director with the Kalamazoo County Human Services Department and program director with Family & Children Services in Kalamazoo. After a four-year stint as a special projects management consultant, she took on the role of director of the newly formed Kalamazoo Communities In Schools, then a part of Healthy Futures, in 1999. Under her leadership, this program grew and evolved. In 2003, she became the executive director of Communities In Schools, a complex non-profit entity that is dedicated to helping young students overcome challenges inside and outside of the classroom and is accredited by Communities In Schools National.

Ms. Kingery served as a graduate field instructor for the WMU Department of Social Work for many years and has been adjunct faculty with the school since 2001. She has served on several local and regional non-profit boards, including the Kalamazoo Institute of Arts, Gryphon Place and the Comstock Public Schools Foundation. In May 2015, she was honored with a YWCA of Kalamazoo Women of Achievement Award, given to women in the community who have made significant contributions within specific areas as a volunteer or in a career. 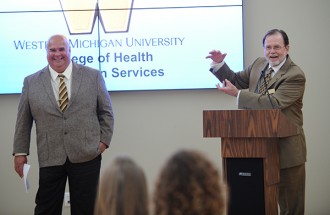 Lt. Col. David R. Arreola, Ph.D.’s career in mental and behavioral health has included significant military service and independent professional practice. He received his graduate certificate in alcohol and drug abuse after earning bachelor’s and master’s degrees in psychology from Western Michigan University in 1981 and 1984 respectively. He went on to earn a Ph.D. in psychology from Michigan State University in 1989, and his military education includes programs at the Squadron Officer School, the Air Command and Staff College, and the Air War College.

Among several roles with the United States Air Force (USAF), Lt. Col. Arreola most recently worked as the lead scientist in influence and cyber technologies at the USAF Research Lab. Prior to that, he acted as chief and director of operations for influence operations at Kelly Air Force Base. Other positions include acting as command consultant in behavioral health, chief of health promotions, and chief of mental health clinics at a variety of USAF bases.

In addition to his military career, Lt Col. Arreola is a fully licensed clinical psychologist for independent practice, a certified substance abuse counselor in the State of Michigan, and is certified through the American Board of Professional Psychology. He has received numerous USAF medals, awards and recognitions, including a Bronze Star, the 1996 Psychologist of the Year award and his Cyber Wings in 2009, which distinguished him as the only airman in a medical field to receive this award. 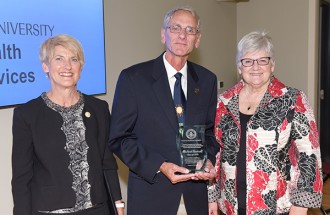 After earning undergraduate and graduate degrees from Western, Dr. Michael Karnell earned a doctorate from the University of Iowa in 1983 and soon joined the faculty of the Pritzker School of Medicine’s Otolaryngology-Head and Neck Surgery at the University of Chicago. Since 1993, he has held a joint faculty appointment at the University of Iowa in the College of Medicine’s Department of Otolaryngology-Head and Neck Surgery and the Department of Speech- Language Pathology and Audiology in the College of Liberal Arts. In addition, he has served as director of that university’s hospital-wide speech and swallowing services since 1996.

Dr. Karnell has published and presented extensively on his research interests, which include normal and disordered laryngeal physiology and voice production and velopharyngeal physiology and resonance disorders, with special interest in cleft palate and swallowing disorders. He has several text books to his credit, and most recently co-authored the second edition of The Clinician's Guide to Treating Cleft Palate Speech.

Since 2006, Dr. Karnell has been a reviewer for several publications, including Journal of Speech & Hearing Research, Cleft Palate-Craniofacial Journal, Annals of Otolaryngology-Head and Neck Surgery, Journal of the Acoustical Society of America, and International Journal of Pediatric Otolarngology-Head and Neck Surgery. He is a Fellow of the American Speech-Language-Hearing Association and has been a long-term, active member of the American Cleft Palate-Craniofacial Association, serving on and chairing numerous committees and leading in executive roles.