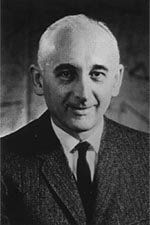 Leonard Gernant was a strong proponent of providing quality services for older adults. He built alliances within the community that addressed the needs of aging people and used those partnerships to help establish many senior-oriented organizations including Senior Services Inc. in Kalamazoo.

According to the late Helen Coover, long-time senior volunteer, "If it hadn't been for Leonard, I don't know when Senior Services would have started. He was the catalyst who got us thinking about services for older people."

In 1934, Gernant earned a bachelor's degree from Western Michigan University and in 1935 he received a master's degree from the University of Michigan. He joined the faculty of WMU in 1943 and held numerous posts in which he displayed a far-reaching compassion for people. His daughter Karen Gernant was quoted in the Kalamazoo Gazette as saying, "His door was always open for anyone: a disgruntled staff member, a faculty member having problems with his department, a student who simply saw walls going up who didn't know where she could go."

Gernant chaired the committee that founded the WMU College of Health and Human Services and was instrumental in establishing a gerontology minor there. After serving the University for more than 32 years, he retired in 1975.

Throughout his career, Gernant headed area organizations focused on serving seniors including the Kalamazoo Commission on Aging, and the Michigan Society of Gerontology. He was also the first executive secretary of the Michigan Commission on Aging, and served as a delegate to White House Conferences on the Aging in 1961 and 1971. He received numerous service awards including the Harry J. Kelley Award from MSG.

In 1975, the Leonard and Frances A. Gernant Gerontology Scholarship Fund was created in his honor to recognize his wish that gerontology have a place at WMU. In 1996, the fund became an endowed scholarship. The award provides funds for individuals dedicated to a career in health and human services with an emphasis on the aging.