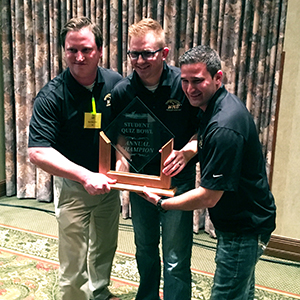 Teams of three first- or second-year PA students from six PA programs across the state competed in the Jeopardy-style contest. After four rounds of intense competition, WMU’s team prevailed by a single point. WMU last won this competition in 2012.

The team - Jeffrey Ryan-Stout, Brandon Aldrich, and Ryan Borg - received a traveling trophy which they will proudly display in the PA/OT reception area on the third floor of the CHHS building until next year’s event.

Congratulations to our PA students on an impressive victory.