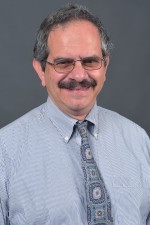 Pancella continued to perform scattering experiments at IUCF after joining the faculty of WMU in 1990. In collaboration with scientists from many different universities he was a frequent contributor to the Physical Review and other journals. He served as chair of the WMU Department of Physics for a nine-year period beginning in 2003, and he has been active in the Faculty Senate, serving on its executive board and as president.

One of the founding members of Western’s Phi Beta Kappa chapter, he has also served as a chapter officer and as president. Pancella is active in the University’s efforts toward sustainable operations and played a key role in crafting WMU’s Climate Action Plan—a blueprint for eliminating greenhouse gas emissions. He has served as interim director of the Office for Sustainability, as well as interim chair of the Department of Chemistry.

Outside of his faculty job, Pancella’s interests include choral singing, astronomy, science fiction, numismatics, and human-powered vehicles. His interest in efficient transportation recently led him to convert an ordinary compact car to full battery electric power. He is the author of books on physics and quantum physics in the popular Idiot’s Guides series.