Ever since the genesis of additive manufacturing (AM or “3D printing” – creating structures layer by layer) during the final decades of the 20th century, a major goal in the manufacturing industry has been to directly convert a computer design into a fully functional, metal part. During the first twenty years, 3D printing applications focused on creating non-functional copies, and the technologies were primarily developed around thermoplastic materials. There are now many options for creating AM plastic parts, including high strength composite plastics for functional parts. However, metal parts are still required or preferred for numerous applications.

3D printers for metal parts have recently appeared on the market, initially for low volume, ultra-complex applications such as for aerospace turbines. The first commercial, metal AM process involved laser sintering of metal powder particles to form each layer, although a variety of other processes have been developed. The deposited layers are sometimes followed by machining and removal of un-needed portions, which is known as the “hybrid AM” process.

While certain manufacturers have made notable progress with AM for metal parts, current processes typically require high power consumption and expensive feed materials in the form of powdered metal or exotic composites. Existing methods generally begin with printing a near net shape or “green” part, followed by a series of post-printing processes such as support structure/scaffold removal, thermal sintering, secondary machining, and surface finishing for the desired end result. The multiple machines involved represent a large facility footprint with significant capital equipment cost and utility infrastructure. Moreover, the tedious post-processing activity, such as the aforementioned removal of build support structures/scaffolding for cavities and overhanging features, or the extensive heat treatment/furnace sintering to relieve internal stresses and fortify layer to layer adhesion, takes significant time that often defeats any build-speed advantage. The resulting, high-effective cost of metal AM has therefore prevented most potential users from accessing the technology. Moreover, the metal parts created by commercial 3D metal prototyping devices often lack durability due to micro defects that are inherent in existing methods. Accordingly, there is still a great need for improvement with regard to material costs, process throughput, and part quality in the field of 3D metal printing.

Researchers at WMU have developed an improved method of metal AM by combining the use of additive welding technology with a subtractive/machining process in a single unit to quickly create metal parts with un-matched complexity, precision, and quality.  This technology can rapidly produce a fully finished part in a single setup, using standard off the shelf welding wire which is available in numerous materials and gauges.

First, a desired number of weld form layers are built utilizing a computer controlled welder and the feed wire. Deposition is followed by selective 5-axis machining (via Computer Numerical Controlled Machining - CNC) of the layers according to the computer aided design (CAD) which is communicated to the CNC machine via computer code. This process is repeated to produce a complete metal part. Test parts created via the WMU process exhibit excellent tolerances and superior structural integrity (Figure 1). 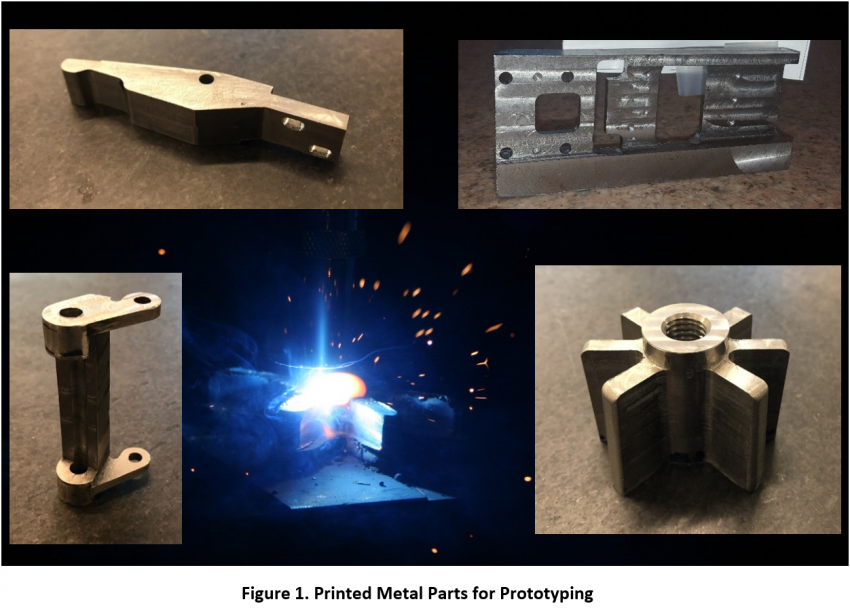 Unlike traditional CNC machining of cast or forged parts, the WMU metal prototyping device and process has complete access to all cavities of the metal part, as each layer is welded/built. The proprietary interleaving methodology and 5-axis approach also provides scaffold-free overhang builds and creates structurally sound, metal parts: lacking micro defects, with low tolerances and quality surface finishes. The rotational speed of the WMU CNC machining steps are slow compared to traditional CNC machining, which limits “wear and tear,” reducing device downtime and maintenance costs.

Due to the straightforward integration of stock/OEM welding and CNC subsystems, the WMU 3D Hybrid Metal Prototyping System (Figure 2) has a low initial cost. Because of economies of scale for the metal welding wire materials, as well as a lower power consumption as compared with laser sintering, low build costs are also achieved.

The WMU technology can be implemented as a retrofit to existing CNC mills in the field or as a fully integrated, stand alone system. Applications include rapid prototyping of functional parts, on demand replacement parts, functional production parts, feature addition, combination  parts from multiple originals, and production line tooling and fixturing devices.