Presently, two aerial refueling methods are practiced. One method uses a hose-drogue-probe assembly for the delivery of fuel.  Alternatively, probe-drogue refueling (PDR) involves coupling a probe on a receiver aircraft with a probe receptacle (drogue) attached to a flexible, fuel hose from the tanker aircraft.  PDR requires skillful piloting to maneuver the 4 inch probe into the center of a two foot diameter moving drogue, while flying at high speed. At the moment of probe contact with the drogue, the drag force on the drogue decreases due to loss of tension, resulting in erratic motion of the refueling hose. This may lead to critical damage to the refueling assembly and the receiver probe.

PDR has always been a technically challenging operation that often results in mishaps and damage. There has been interest in an active control system on the drogue and improvements to receiver probe design to eliminate stress overloads in the probe and the hose-drogue system during coupling and refueling. In addition, automated aerial refueling procedures have been under development in recent years and will be of great utility for refueling of unmanned aerial vehicles (UAV).

Required for development of any new system for PDR is accurate simulation of the effect of turbulence on drogue and hose motion.

Dr. Kapseong Ro has developed a dynamic software model that accurately captures the motion of a hose-drogue assembly affected by the motion of a tanker and receiver aircraft during aircraft refueling maneuvers. The model is incorporated in a MATLAB/SIMULINK® software program.  The program predicts the hose-drogue motion in 3-D space (trajectory) versus time in response to tanker motion and wake generation, atmospheric turbulence, and approaching receiver aircraft fore-body aerodynamic effect. The program also predicts the post-contact wave motion of the hose for different closure-rates of the receiver aircraft and tension changes in the hose.

This program has been utilized to design a drogue, active control system, and is useful for designing more robust drogue and probe hardware, developing automated aerial refueling systems, in addition to novel actively controlled drogues. 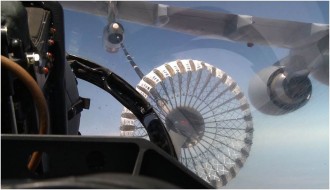 •    Permits testing of designs for improvements to PDR before and during development
•    Utilizes MATLAB/SIMULINK® software structure, interface
•    Simulates effects of tanker and aircraft turbulence, and atmospheric turbulence on hose drogue assembly.
•    Predicts wave motion of refueling hose due to loss of tension after coupling for different closure-rates