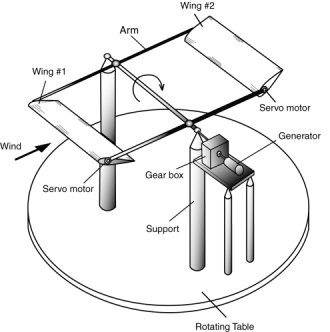 Government and industry have aggressively pushed the development of wind turbine technology. Horizontal-axis wind turbines (HAWT) have been widely adopted for commercial power generation, while there are numerous issues that decrease the cost-efficiency of medium and large size HAWT.

Because aerodynamic force is proportional to the wing area of a blade, it is difficult to maximize the effective wing area of a rotating blade as the size of the blade increases.  The turbine blades must be long and slender, particularly near their tips to reduce centrifugal force and maintain structural integrity. This limits the effective wing area near the tip of the blade, where a considerable amount of aerodynamic torque is normally generated. Installation of long slender blades on a large-sized HAWT is particularly difficult, and requires special equipment that may not be easily operated in certain terrain. Contamination from dead bugs and birds near the leading edges of blades can reduce their aerodynamic efficiency by 50%, and cleaning the blades is not an easy task.

The wings can be made from light composite materials reducing the power required to adjust their angle of attack, and the wind speed needed to move them. This is because the two wings balance each other on opposite sides of the central axis, and wing loading is typically low during operation. This also allows the effective wing areas to be large, without requiring oversized support structures. The wings can be manufactured at a low cost because of their simple structure and geometric shape. All of this results in a highly efficient and cost-effective electricity generator. 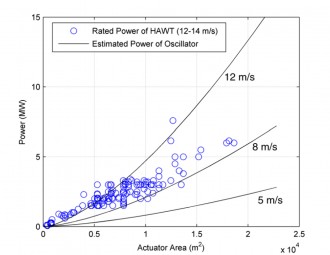