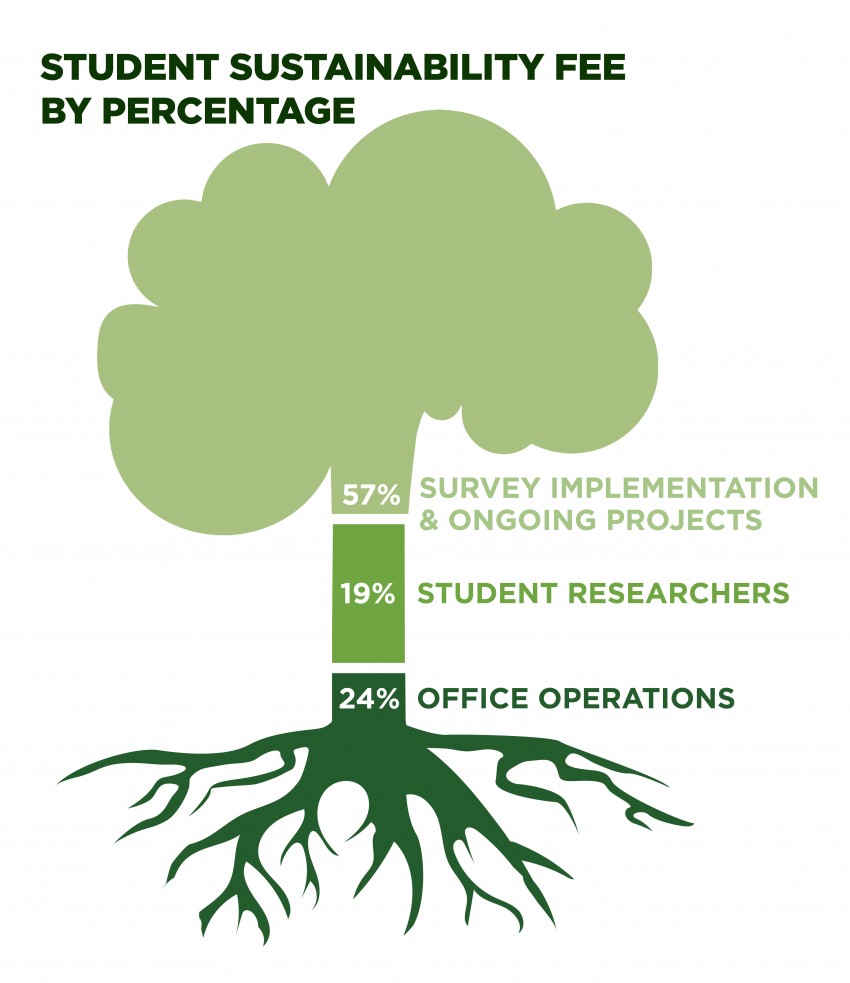 Western Michigan University is proud to be Michigan's first college or university to adopt a sustainability fee. Students convinced the Board of Trustees to create the Student Sustainability Fee (SSF) which is $8 per semester, $4 per summer session fee in early 2010, and since then it has funded 100% of three distinct accounts: The Student Sustainability Grant, the Survey Implementation and Ongoing Projects fund, and the Student Researchers fund. The remainder of funds generated by the fee are used to supplement the Office for Sustainability's general operating fund.

Up to $100,000 is available annually through the Student Sustainability Grant (SSG) to fund student-authored proposals which promote a campus culture of sustainability and have the potential to benefit all WMU students. WMU's Student Sustainability Grant Allocations Committee is 100% student led and includes representatives from all academic colleges and both undergraduate and graduate students. There are very few other programs in the world that include this level of student involvement. Instead, most grant decisions are made by committees composed mainly of faculty or staff. The SSG-AC reviews proposals twice per year. Deadlines, applications, guidelines, and a complete history of allocations may be found on our grants page. Money for the Student Sustainability Grant program is reserved from the Survey Implementation and Ongoing Projects Fund. All funds from the SSG that are not allocated within a given fiscal year are rolled over to the Survey Implementation and Ongoing Projects Fund.

The Survey Implementation portion of SIOP relates to the annual Student Sustainability Survey. The two most central, complex questions of the survey seek to gauge students' opinions about how the University should prioritize and fund sustainability projects and initiatives. Actions such as reducing the amount of waste that is sent from campus to landfills, reducing campus-wide greenhouse gas emissions, expanding sustainable agriculture on campus, etc. are rated against each other to establish students' priorities. Then, existing projects are rated against each other to inform funding decisions. The results of the Student Sustainability Survey weigh heavily in all funding decisions related to SIOP.

WMU is engaged in several ongoing sustainability projects that require continuous funding. Examples include the EcoMug & Ecojug Program, Wesustain Internship, The Bike Stable, the Gibbs House Permaculture Research and Demonstration Site, and many more. Each time a new, student initiated project requiring ongoing funding is established, money is set aside from SIOP. This may also include long-term costs associated with the Student Sustainability Grant. The Office for Sustainability attempts to find additional funding sources for these projects and initiatives whenever possible. In the case of the EcoMug, in 2012 Consumer's Credit Union became the program's first sponsor, reducing the money spent from student fees.

Student Researchers represent 19%, or $1.52, of every $8.00 Sustainability Fee. Over 75 students, hailing from the United States, Haiti, Kenya, Nigeria, Dominican Republic, Japan, Ethiopia, Poland, and China, have participated in research since fall 2010. These paid positions include part-time positions at the Office for Sustainability and periodic graduate assistantships. The Office for Sustainability employs over 12 students per semester in positions ranging from the building's front desk workers to graduate researchers.

Supplemental funding to the Office for Sustainability

history of the student sustainability fee

The WMU Student Sustainability Fee (SSF) originated with a group of students who were inspired during a 2009 trip to Ball State University’s “Greening of the Campus” conference in Muncie, Indiana. The idea of a ‘green fee’ to support campus sustainability initiatives was novel to the student group, and they wished to begin collecting a similar fee on WMU’s campus. One student, Kate Shields, began an independent study project that, by 2010, had gained so much traction it transformed into the Sustainability Fee Initiative. This initiative turned into a full-fledged student led campaign, which resulted in a ballot initiative posed to the student body during the annual student elections. The proposal to institute a sustainability fee passed; 1664 students voted on the referendum, 60% of which were in support of the fee. The VP of Student Affairs, Diane Anderson, subsequently forwarded the proposal to the WMU Board of Trustees, where it was unanimously approved, establishing WMU as the first college or university in Michigan with a green fee. The WMU SSF has become a facet of campus culture in part because it was heralded by a student-led initiative, and the money collected from the fee primarily supports student grants, research position for students, an internship program, and projects. A portion of the fee supplements the OfS operations. This means that SSF monies are predominately focused on supporting initiatives, programs, and projects that create opportunities and improve the overall well being of students during their time at WMU.