In the Spotlight: Brandon Bye 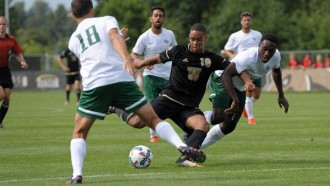 For Brandon Bye, relationships are the key to success. And it’s his relationships on and off the field that helped him succeed as a food and consumer package goods marketing and integrated supply management double major, become the most decorated player in Bronco men’s soccer history and earn the chance to play soccer professionally.

“The biggest thing I’ve taken away from the college of business that relates to soccer is the ability to build relationships,” says Bye. “Whether it’s in a corporate office, the classroom or on the field, having quality relationships is something that is a must to be successful, and I’ve taken something from every professor I’ve had at WMU.”

The key to all of his success? Hard work and, you guessed it, relationships.

“The greatest challenge I’ve faced so far is balancing academics and athletics,” he says. “The balance was tough, but having a good support group like I do is helpful.”

His first priority after being drafted by the New England Revolution? Contributing to his new team in any way possible.