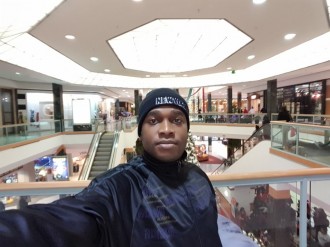 Student takes first steps toward his future by studying at CELCIS

Newly arrived from Kinshasa in the Democratic Republic of Congo, Alain Nzita is motivated to learn English, earn a graduate degree, and to become involved in the WMU campus community. As a native French speaker, Nzita enjoys books and movies to improve his language learning. “I just discovered Netflix, and it has helped me develop my listening skills,” Nzita said. "I really love the shows, Flash and Arrow, because they are about super heroes who fight for and try to improve the lives of others. One of my favorite American movies is Limitless with Bradley Cooper. I also like books, such as Tecumseh, which is the story of a Native American from Michigan. Currently I am reading The Last Lecture by Randy Pausch, a former professor at Carnegie Mellon.”

Nzita has big dreams to someday work for the United States Agency for International Development (USAID) or the United Nations. “I want to work in the internal structure of government to help my country become more developed,” Nzita said. He began taking English as a Second Language classes through CELCIS—the Center for English Language and Culture for International Students—at WMU in January 2016, and he said his English skills have already improved greatly. “Learning English in CELCIS classes is easier because our professors understand the challenges non-native speakers face, and, as students, we are all learning together,” Nzita said. “To help us adjust to a natural English speaking style, every morning at the beginning of class my professors teach us American slang words people use regularly, which makes us feel more comfortable when speaking to American students.”

Upon completion of the CELCIS program, Nzita plans to pursue a major in international development administration. That means Nzita has four years of schooling ahead of him at WMU; he is motivated and eager to learn as much as possible before going back to Kinshasa to secure a position related to developmental work.

After hearing about the positive experiences his cousin was having at WMU and that the University is ranked as top-100 public higher education institution by U.S. News and World Report, Nzita chose WMU. His cousin, Rachal Etshim, is a Doctoral Student working on his degree in Educational Leadership, Research and Technology: Organizational Analysis. “A degree earned in the Congo does not carry as much weight as a degree from another country,” Nzita said. “If you want to find a good, competitive job, you need to go to school in another country. With a master’s degree from WMU in hand when I go back to Kinshasa, I can find a much better job than I otherwise would have.”