In Conversation with Christina Quarles: Yew Jumped too Deep, Yew Buried the Lead

Posted by Indra Lācis, PhD, Director of Exhibitions on April 11, 2019

This winter the Richmond Center for Visual Arts hosted Los Angeles-based artist Christina Quarles’ first major exhibition in the Midwest and the largest presentation of her drawings to date. Comprised of two iconic paintings and a suite of fifty drawings, the exhibition Christina Quarles: "Yew Jumped too Deep, Yew Buried the Lead" visualized how we understand relationships through our bodies, which are at once physical, emotional, social, and psychic entities. Embodying contemplative stillness as well as an intense, musical frequency that projects outward, Quarles’ work brings to life the notion that “painting” and “drawing” function as verbs and nouns simultaneously—as acts of doing and as objects in the world, or entire worlds onto themselves. Quarles seems to recognize this idea intuitively, translating that raw push and pull into an animated, delicate formal balance, flush with the complexities of what it feels like to live in the body.

In mid-March, during the final days of her exhibition here, Christina and I corresponded and looked back on the works included in "Yew Jumped too Deep, Yew Buried the Lead." Our transcript follows below. Read more about the exhibition at the Richmond Center, and check out Christina’s current show at Regen Projects in Los Angeles. 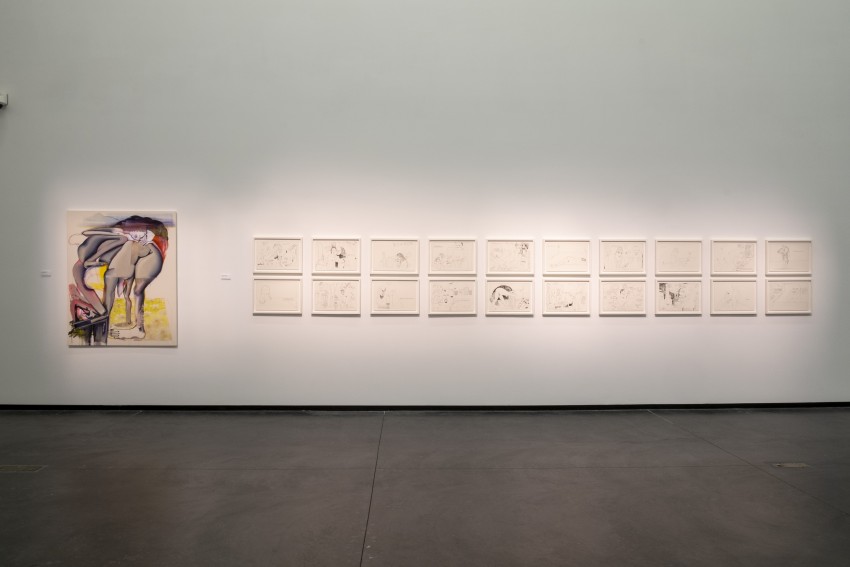 IL: Christina, let’s start with this suite of fifty drawings. You’ve mentioned how important these drawings are to you on a personal level and within your practice as a whole. What role did these drawings play in the development of your paintings across the past three or four years?  And what role does drawing continue to play in your current day-to-day?

CQ: I was taking an extended break from a studio practice in my mid-twenties and working as a graphic designer. It was a printing mix up that resulting in my having a surplus of 100 sheets of 13 x 19 inch paper. I couldn’t do anything with them in my job so I decided to use the opportunity to begin drawing again. It was the first time I had a feeling of an abundant amount of supplies (100 prepped surfaces!) that didn’t cost me a thing, which took a lot of the pressure off of trying to make anything too profound and instead allowed me the freedom to just draw whatever I felt like drawing. At the time, I was, for whatever reason, pretty biased against text in work, so I decided to include text in the drawings—I figured that by including something right off the bat that I wouldn’t normally allow myself to do would allow me to be as irreverent and unbridled as I wanted in the visual content of the work. The result was 100 drawings, fifty of which are in this exhibit, where I felt like I was expressing my true artistic voice for the first time.

When I went to grad school, I was determined to capture the freedom I found in these first 100 drawings in something beyond ink on paper. It took many failed attempts, usually involving me making a great drawing and then filling it in with paint before I finally drew with a brush. Drawing with a brush opened up painting for me--suddenly I was creating the same gestural, fluid, lines found in my drawings but I was able to use a myriad of tools and paint finishes and colors to create these lines.

I still make the drawings at the same13 x 19 inch size on the same paper with black ink. The drawings are not sketches for the paintings but are a parallel practice all their own. Their scale and material awards me with a sense of disposability where I can be as outrageous as I want while coming up with visual innovations that I’ll sometimes incorporate into my paintings.

IL: Let’s talk more about language and your use of text. The title of this exhibition, Yew Jumped too Deep, Yew Buried the Lead appears in one of the images, for example. To my knowledge, none of your paintings have incorporated text in such an evident and straightforward way.  Can you tell us about the difference in approach?

CQ: I tend to get certain phrases stuck in my head, sometimes from high cultural sources like literature or theory, but more often from low or mass cultural sources like pop music and television. Text in my drawings comes from a process of quoting and misquoting these phrases. I find the play of language, especially puns and double entendre, to be endlessly inspiring. Language can be shared and understood, but also exists in one’s specific recollection or interpretation. The word tree can be understood, but the particular tree it conjures in one’s mind will vary in each person reading or hearing the word. In this way, language occupies a peculiar space that is at once public and private.

I actually went through a phase of incorporating text into the paintings, but I found that there was too much of a temptation for the viewer to latch onto the text as the direct description or solution to the imagery, which was not my intention. My intention was always to ground the figures in my work to referents that are familiar in our world but, through punning and double entendre, have multiple and simultaneous locations. When I took language out of my paintings, I began expanding the patterns that are now found in my work. I look for patterns that can offer a visual punning, a pattern of simple flowers that can be “read” as simultaneously a manufactured textile/flowers in a field and as liquid/solid. I think that since the drawings are made entirely of lines produced with a pen, the text can be more integrated in the visuals and not necessarily read as descriptive captions. In any case, one of the reasons I still make the drawings alongside my paintings is to play with text. 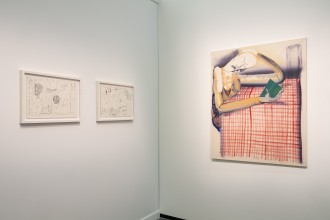 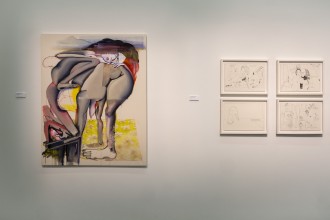 IL: In many of these drawings you use line as a way to merge forms instead of dividing them.  Is this something you do consciously, or do you tap into a more unconscious way of working when you draw?

CQ: I don’t do this consciously as I draw, but it is something I reflect on when looking at my drawings. In both my drawings and my paintings I am interested in limits of representation, meaning both the limits, or the shortcomings, of representation, as well as the limit, or the parameter, that define a thing, an idea, a self. Often the boundary is only made clear when contextualized in relation to other boundaries. We know ourselves in relation to others, in our similarities and differences to others. And in this, the boundaries that define are in continuous flux, in a state of perpetual becoming done and undone in relation to context. I explore this concept of edge through the line work in my drawings, often having the line that forms one element be the same line that defines another element, or the line that represents positive space suddenly flip into being the representation of negative space. 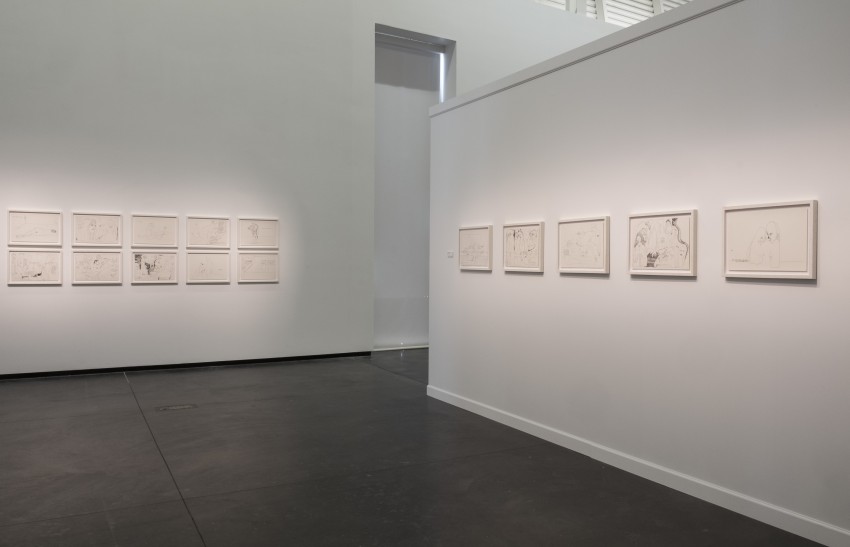 IL: Painting is often said to embody the cultural ethos of its time, both completing history and disturbing it.  Broad as it is, do you think that’s a fair assessment of painting or do you consider painting a far more personal enterprise? In many ways, your work seems to hit at the heart of current issues regarding gender and race identity.

CQ: I have found that the best way to tap into a broader cultural ethos is to be as honest and specific about your own personal experience. For example, one aspect of my work is an interest in exploring issues about race. However, my specific experience of being within a racialized body, one that is socio-historically black but one that looks white, is so much more complicated than the color of my skin. Therefore, to honestly and specifically address my experience, I choose to represent race in work through fragmentation, compartmentalization, and containment, rather than naturalistically rendered skin color. I aim to explore what it feels like to be within a gendered, racialized body, rather than what it is to look upon a gendered, racialized body.

IL: Your work has been associated with the term “intersectionality,” which refers to the concept that our identities are defined by multiple dimensions—our race, ethnicity, age, socio-economic strata, sexual orientation, and so forth. Let’s talk for a minute about how issues of both belonging and disconnection become threads in your work. Did this approach begin in your drawings and transition into the paintings?

CQ: I think that we are often less aware of aspects of our identity that benefit from the systems in which we live. The further our own identity strays from that which holds power, the more apparent it becomes. For example, I have been more influenced by the aspects of my background that do not easily adhere to the heteronormative, patriarchal, white, Western ideals that structure my daily life, namely my being a woman, a person of color, and queer. Meanwhile, I only occasionally consider the aspects of my identity that more readily adhere to the current structure of power, including my being cis-gendered, a US citizen, and being able-bodied.

My race has, perhaps, most profoundly influenced my understanding of intersectionality because it strays the farthest from the norm, being not only non-white but also racially multiple. I was born to a white mother and a black father so my race, by virtue of being half black, is not white. And yet, because I am almost always mistaken for white especially by white people, my race is not defined by experiences of inhabiting a body that is seen as black. We crystalize our sense of self by understanding our similarities and differences to those around us, through community and solidarity. I identify with people in my family who are black and people in my family who are white. I do not have any singular “mixed race” experience, rather multiple and often contradictory racial experiences. Yet still, I tend to feel most black when I am in a room full of white people and most white when I am in a space carved out for black people. Because of this, my place is so often my misplace, and in my work I try to capture this feeling of both being a part of and apart from one’s situation.

The Richmond Center is free and open to the public.