The Western Michigan University School of Music and Department of Dance are housed in the Dorothy U. Dalton Center, which offers some of the finest music rehearsal, study, practice and performance spaces in the world. Adjacent to the nationally recognized James W. Miller Auditorium, the Dalton Center boasts 157,000 square feet of space, which is equivalent to 4.5 football fields.

Its distinctive spaces include:

Learn more about the School of Music spaces

Learn more about the Department of Dance spaces

Before Gold Company, there was the Varsity Vagabonds! 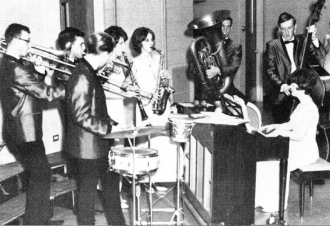 The Varsity Vagabonds were brought to life by Dr. Elwyn Carter who served as head of the music department from 1945 to 1965. The 14-voice group provided a solid foundation for today’s internationally recognized vocal jazz ensemble that has given WMU much to be proud of. The Varsity Vagabonds performed in various programs consisting of folk songs, spirituals, light classical and classical music. Over the years, the Varsity Vagabonds created many recordings including an audition tape for the 1974 USO Caribbean Tour. The track featured is one of many included on the audition album recorded in the fall of 1972. The recording showcases the range of talent represented by the members of the ensemble. In 1978, the group was renamed Gold Company when Dr. Steve Zegree became director and began to focus on vocal jazz.