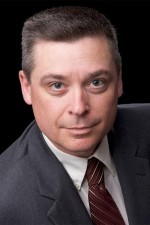 Daniel Guyette joined Western Michigan University as dean of its College of Fine Arts in August 2013.   Guyette brings 24 years of experience in teaching and administration to the position, including nine years as a dean, overseeing two fine arts colleges, most recently at Western Washington University. His appointment at Western Michigan University includes a position as a tenured professor in the Department of Theatre.

Before being named dean at Western Washington, Guyette was dean of the College of Fine Arts at the University of South Dakota for five years and chair of the Department of Theatre Arts and Dance at the University of Northern Colorado, where he also was a full professor in the theatre department. Earlier in his career, Guyette served as an assistant professor at both Utah State University and Guilford College.

An award winning designer, Guyette has worked professionally for more than 25 theatre companies and universities. He earned his bachelor's degree in speech from Northwestern University and a master's degree in scenic and lighting design from Pennsylvania State University.

"I am thrilled to be offered this position and to be able to work for an institution with such a reputation for high-quality education,'" Guyette says. "The College of Fine Arts has been known for quality in the arts for many years, and under the leadership of Dean Merrion, it has grown to national stature. Serving as the next dean of the college is a wonderful opportunity."

Guyette is a member of the International Council of Fine Arts Deans and was elected a board member of that organization in 2010. In 2012, he created a workshop for new deans through that organization and has been asked to repeat it again this fall. He is also chairing the organization's 50th anniversary event this fall and has served as chair of its Career Development Task Force since 2008.

Guyette also has been active with the U.S. Institute for Theatre Technology, serving as the organization's scene design commissioner for six years, as well as with the American College Theatre Festival.