“The marching band added a great deal to my high school experience,” says Weir, an assistant professor of physical therapy at Western Michigan University who grew up in Coloma, Michigan. “The life lessons of participating in band have carried over to almost every experience that followed. Time management, discipline, teamwork and organization are skills that I have carried with me. 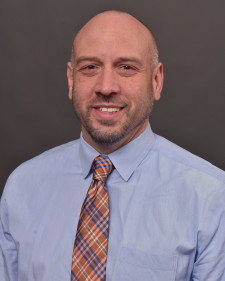 Now, he’s paying it forward, creating a scholarship to encourage other band students to pursue their passion in higher education.

Established in 2017, the $1,000 Rodney Weir Marching Band Scholarship is given through the Berrien Community Foundation to a Berrien County high school graduate who joins a college marching band. The goal is to offer support and encourage students to take their band experience to the next level.

"It's a chance to give back to the community and to connect with kids," says Weir, stressing the importance of investing in students in underserved areas such as his hometown. "Some of them are the first in their family to go to college. It's about making sure they know (college) is an option and encouraging them to take that step."

"Dr. Weir has found a way to help students in need of financial assistance to go to college and participate in an activity that means a lot to them," he says. "Because of this scholarship, students are able to better afford this necessary next step in their growth and development."

Harris also points out students who participate in campus activities have a higher graduation rate, another benefit of encouraging students to get involved on campus while continuing their education. 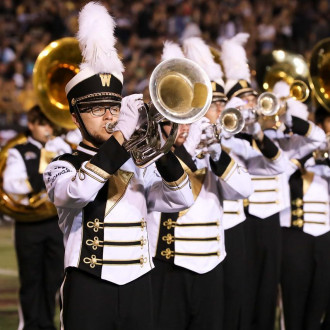 "The rigors and amount of rehearsal help students learn to schedule their time and prioritize their lives," says Harris. "This does translate to every aspect of their future lives. Also, with the leadership opportunities that marching bands offer, students are given many other chances to develop their non-academic skills."

Scholarship recipient Eric Gorzynski, who earned a bachelor's degree in accountancy in April, is a testament to the impact being part of a band can have. A euphonium player in both high school and college, he says the Bronco Marching Band became his "second home."

"The Bronco Marching Band also inspired me to grow as a person and to get out of my comfort zone. I gained the confidence to go out for a leadership position, and it has helped me to become a better person. It has taught me so many lessons that I can use in my future."

"After receiving this scholarship, I realized how lucky I was to be able to continue what I loved in college," adds Brad Kelley, an aviation flight science student and trumpeter in the Bronco Marching Band. The first recipient of Weir's scholarship, he hopes to one day become an airline pilot while continuing his love of music by giving trumpet lessons. "This definitely inspired me to give back as well." 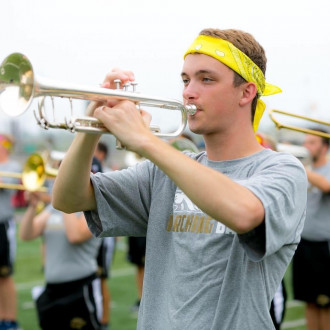 "I want to be able to help the community and give students the opportunity to be able to be a part of something like the Bronco Marching Band that they might not have been able to do," he says.

"I hope that as more people hear about this opportunity, others will step up to create similar versions—and not just in the marching band arena," adds Harris. "Any time a student can use their passions to get them ahead, it's a win."

Weir is working toward endowing the scholarship and hopes to expand its capacity in the future. But, he says, that doesn't have to be everyone's goal.

"You don't have to be multimillionaire, you don't have to fully endow a scholarship, but just giving back in some way is really the message I hope people will take away."