Network neuroscience: Alumnus finds career at the intersection of data science and the brain 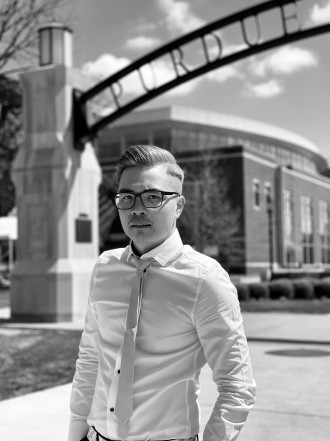 KALAMAZOO, Mich.—As medical breakthroughs continue to improve the human condition, data scientists in the specialized field of network neuroscience are striving to isolate even more information and close the gap between their discoveries and clinical applications in an effort to advance diagnoses and personalized treatments. Among those elite researchers is Western Michigan University engineering alumnus Duy Duong-Tran, who moved into the academic-research field after a pivotal conversation with College of Engineering and Applied Sciences Dean Steve Butt.

“After working in the automotive industry for more than a year, I visited Dr. Butt who helped me realize I was more suited to an academic career,” says Duong-Tran.

right then, his career trajectory changed

Now a Purdue Bilsland Dissertation Fellow at Purdue University and visiting researcher at the University of Pennsylvania’s Perelman School of Medicine, Duong-Tran is teaching, researching and studying data science and network neuroscience—and still learning more and more about the world.

“In my roles, I have opportunities to connect with students all over the world. This exposure has allowed me to learn as much from them as they do from me, both culturally and intellectually,” says Duong-Tran. “With formal training in industrial engineering (which brings mutual understanding from different disciplines to advance a common cause) and neuroscience (especially research in the human brain), I found many interesting latent links between diversity, equity and inclusion and how these are related to human brain functions.”

Already, his Google Scholar record is filling up, with 10 publications in just four years. Duong-Tran’s research focuses on the intersection of network science—an emerging research area greatly inspired by graph-theory—and theoretical/computational neuroscience. His dissertation, titled “On geometric and algebraic properties of human brain functional networks,” is on target to be completed by the end of Spring 2022 semester.

Recently, Duong-Tran has accepted a tenure-track faculty position as assistant professor of mathematics at the United States Naval Academy—the No. 1 public and No. 6 overall liberal arts institution in the United States, according to the 2022 U.S. News & World Report. When he begins his position in 2023, he will become part of the core faculty in the newly developed data science major and will serve as liaison between the mathematics and computer science departments to maintain and improve data science curriculum. He will also build an undergraduate research program in data science and network neuroscience to provide the students exposure to research and discovery.

“I started college as a pre-pharmacy student with my genuine curiosity for science at the intersection of math/physics/chemistry/biology,” explains Duong-Tran. “I decided to pursue my bachelor’s degree in mathematics and engineering instead as these more aligned to my personality and career interest—but my curiosity for human health and science continued to deeply resonate in me.”

All of this, and encouragement from Western faculty, led to new pursuits and his new position.

First, he earned his undergraduate degree with a double major in industrial and entrepreneurial engineering and mathematics in 2014. Duong-Tran returned to Western to pursue his master’s degree, which he competed in 2017. The success he found at the University piqued his continuing interest in data science and pushed him to continue his studies. He received continual support and recognition from the Western faculty who encouraged and rewarded his scholarly contributions with the Outstanding Industrial Engineering Master Student Award in 2017.

Immersed in a relatively new field, the future Professor Duong-Tran has set-up his life as an educator and researcher in the field he loves as he helps advance the emerging field of data science and network neuroscience through research that builds a stronger foundation to personalized medicine or therapeutic solutions.

Read more about Duong-Tran’s activities on his LinkedIn profile or examine his work through Google Scholar.