The American Political Science Association reports that the job outlook indicates cautious optimism. Professional and highly skilled jobs will continue to grow at a faster rate than total employment figures. Consequently, students should keep in mind the long-term benefits of focusing on a specific set of skills. Additionally, today's high-tech job market requires mathematical and statistical skills, as well as computer competency. Strong communication skills are another requirement for a successful career. Finally, the ability to think analytically and imaginatively is necessary; the ability to conceptualize, recognize and gather information, analyze problems and propose solution strategies are all important factors in achieving career goals.

The following are career options as identified by the American Political Science Association.

A degree in political science prepares undergraduates for the successful pursuit of a legal career. The study of politics helps develop communication and critical thinking skills, and a basic understanding of institutions, economics and human values. Whether it is for preparation for admission to law school, a career as a legal assistant or other careers requiring legal training, a degree in political science helps provide the skills necessary in the increasing legal complexity of business and government. 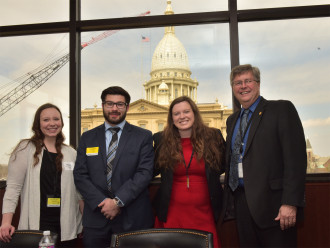 A political science graduate may find employment in almost any agency or branch of the U.S. government. Those who are interested in a career with the federal government can acquire analytical skills and the ability to write clearly through the study of politics. In addition to various careers on the national level, every federal agency has some form of an international division. Students who wish to pursue a career in the field of international politics can gain the primary knowledge necessary from the study of international affairs and politics.

State and local governments play a role in virtually every area that has an effect upon the lives of the people in the community. A degree in political science provides the capabilities needed for one to handle the quantitative data (statistics and numbers) used in decision making on policy. As part of their undergraduate program, an internship is recommended for students interested in a career in state and local government.

Organizations formed by people with similar political perspectives such as business firms, individual corporations, universities, hospitals, local governments and labor unions have increased attention placed on policy making processes. This in turn has created a large job market for those who understand how the U.S. government operates. A degree in political science can give one the understanding of government needed as well as, the ability to analyze and assess public policy in order to beneficially influence the results of political procedures.

The field of international employment continues to increase for political science graduates. The continued success of the international business and banking communities has become reliant on those who possess an understanding of the political, regulatory and economic environments in which business is conducted. Undergraduate training in political science, combined with other liberal arts education, will develop the skills necessary to earn employment in either the public or the private sector.

A degree in political science will provide a graduate with the knowledge essential to pursue a career in the field of campaign management or political polling. The skills an undergraduate will obtain are the understanding of how the American political system works, the ability to write well, and the experience needed to deal with survey research and data analysis. The shift of campaign responsibilities from the political party to the candidate requires more workers and management for the running of a successful campaign. This need opens several employment opportunities for those who are interested in electoral politics. 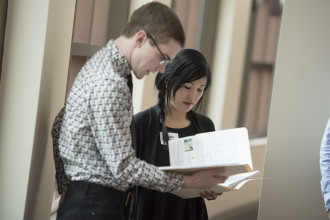 The basis of good reporting lies in the ability to identify and comprehend significant events, and translate observations quickly and clearly into writing. Understanding many of today's events requires basic course in English and journalism, as well as a broad liberal arts education with an emphasis on political science, history, economics and sociology studies. Specifically related to political science, students interested in journalism might focus on courses addressing American domestic policy, including national, state or local concerns. Other areas of focus might include campaigns and elections, foreign affairs and international politics. A serious political science graduate will have a much better understanding of society, which is crucial in handling the challenges and responsibilities of a journalist.

Elementary and secondary education students who wish to teach government, social studies, history or current events should plan on studying political science during their undergraduate program. The study of American and world history coupled with a significant amount of American government sets up a strong framework for primary education givers. A political science education will be a valuable asset when applying for administrative or teaching positions in either grade schools or high schools.

Political science as a career

Students who aspire to a career in political science will need to continue their education toward a master's or doctoral degree. The majority of positions available for political science graduates are located in colleges and universities. However, there are several opportunities in government agencies, media, state legislatures and on staffs of committees of Congress. All of these careers require an education that can only be achieved through the obtainment of a M.A. or Ph.D.