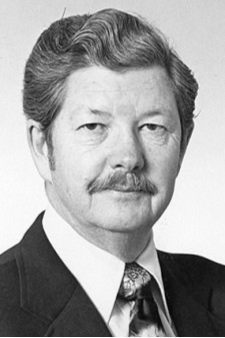 Dr. Phillips taught in the Political Science Department and played a significant role in creating international education programs at WMU. Along with President Haenicke, he co-founded the Haenicke Institute for Global Education. He also developed programs for International Education including a master’s and specialist program. Due in part to his efforts, WMU received the 1966 Institute of International Education Reader’s Digest Foundation Award for Excellence in International Education. He was the principal force behind WMU instituting a graduation requirement in the early 1960s that all students complete a course on the Non-Western World as part of their general education courses. It was unique to require such a course at a school of WMU’s size and the university was recognized for implementing Dr. Phillips suggestion. He co-created the Master’s in Development Administration degree in 1980.

He had leadership roles in campus councils and organizations. He sat on the Faculty Senate for 16 years and was VP from 1981-83. Appointed by WMU presidents and provosts, he participated on many important committees dealing with institutional evaluation, planning, and expansion. In 1984, Dr. Phillips earned the Distinguished Service Award for his dedication to WMU. The Michigan Association of Governing Boards recognized Dr. Phillips for his achievements.

Dr. Phillips brought leading scholars to campus and helped area high schools improve their cultural studies. He created an area studies library with more than 3,500 specialized volumes. He was a Fulbright scholar in India in 1961 and directed a Peace Corp training in Nigeria in 1965. His research in Nigeria led to two texts on Nigeria and Africa. He contributed countless books and journal articles on third world countries for the political science field.

Later in life, he dabbed his hand in fiction writing tying to his roots in West Virginia. Published in 2004, “The Shot from the Mountain: An Appalachian Odyssey” won literary awards. The novel disclosed the life and adventures of an Appalachian miner eagerly trying to improve his life and the lives of his family. He earned his B.A. and MA from the University of Tennessee and his Ph.D. from Duke University.

"In fact, there is hardly an aspect of University life that has not been felt by Dr. Phillips’ influence, be it research, academic standards, collegiality, or institutional growth.” -introduction of Dr. Phillips at April 1984 graduation commencement exercises.