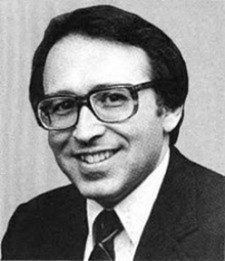 He returned as a guest teacher and lecturer often.

Originally from California, Dr. Wolpe moved to Michigan to teach African political studies at WMU in 1967. He resigned in 1972 to be an elected official but remained close to his WMU ties for the rest of his life. First, he sat on the Kalamazoo City Commission as part of the liberal slate. Three years later he was elected as a Democrat to the Michigan House of Representatives. In 1976, he ran a close race for US House of Representatives but lost to Republican Gary Brown. During the next two years he worked as a staff member for US. Senator Donald Riegle. He successfully defeated Rep. Gary Brown in 1978, beginning a 14 year career in Congress. He represented the third district consisting of Kalamazoo, Battle Creek, and Lansing.

Dr. Wolpe’s mother participated in the Civil Rights Movement of the 50s and 60s which some believe ignited his passion for African studies and fueled his views on helping apartheid victims. His congressional actions were instrumental in ending apartheid in South Africa. He chaired the Africa Subcommittee on the House Foreign Affairs committee. During 1980s, the US and other countries were still deciding their stance on South African apartheid. Mr. Wolpe strongly advocated for economic sanctions against the South African government. The committee proposed the Comprehensive Anti-Apartheid Act of 1986. This bill would ban new trade in South Africa and forced the release of imprisoned and anti-apartheid activist Nelson Mandela. This was the lesser of two bills presented. Congress passed the bill twice, the second time overriding President Reagan’s veto. Apartheid in South Africa soon ended. The act also provided famine relief and development assistance in South Africa and in conflicted countries like Congo, Rwanda, Burundi, and Uganda. Upon release, Nelson Mandela phoned Mr. Wolpe and thanked him for his role in ending apartheid.

Due in part to his aggressive approach of the Comprehensive Anti-Apartheid Act and strong liberal standpoints his district was re-drawn, a process called gerrymandering. Dr. Wolpe chose not to seek office again and he retired from Congress at this time. His political roles continued after retirement. He was the Democratic Candidate for Governor for the State of Michigan in 1994 but lost to John Engler. President Clinton appointed him to be the Special Envoy to Africa’s Great Lakes. He was the Director of African Program at the Woodrow Wilson International Center for Scholars. Last but not least, President Obama appointed him to be Special Adviser for Africa’s Great Lakes Region in 2009.

He was dedicated to his constituents. He never missed a chance to serve in his district. When the tornado of 1980 hit Kalamazoo, he took the first flight home to be with the people of his district and provide aid in any way he could. He even offered to help his successor Republican Fred Upton in the early stages of transition.

The Howard Wolpe Scholarship is an annual award given to a student who is a political science senior, US citizen, and one who demonstrates overall academic excellence at WMU, especially in political science.

The Howard Wolpe Scholarship for African Study is given to a graduate or undergraduate political science major student who is engaging in the study of Africa or selected African nations and plans to travel to Africa.