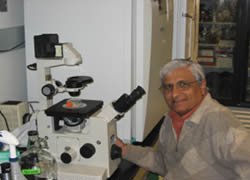 As a public university, Western Michigan University prides itself on providing solid undergraduate and graduate-level programs while being able to provide researchers the opportunity to develop ideas into reality. Dr. Karim Essani of the Department of Biological Sciences specializes in the study of molecular and immunological aspects of viral infections. Essani has been a member of WMU for the last 15 years and has contributed 25 original publications to the scientific community. He is one of a handful of researchers at WMU who have had the opportunity to conduct original work and see their projects develop into commercialized products. Using the tanopox virus as a model for his research, Essani looks at the molecular mechanisms within the viral model that dictate which gene sequences are expressed or kept silent.

Similar to the human genome, viruses are used by Essani and many top research universities because of similarities and the ability to manipulate the genome. Applying all of the data and knowledge gained from his research, Essani has focused on how different viruses can harm or benefit the human immune system. Viruses have evolved with time and have developed defense systems that can counteract the reactions of the host cell. When the tanopox virus enters a cell, it is able to reprogram the cell and dictate new processes to be performed.

Once tanopox virus has entered the cell, a new protein is produced which is then secreted into the blood stream. It may be this protein that could eliminate the need for having open heart surgery to free clogged arteries. One could simply be injected with the viral protein that would essentially serve as Drano for the body’s arteries. Viron Therapeutics has been developing one of the viral proteins discovered by Essani, conducting clinical trials on it for FDA approval as a therapeutic. The results so far are very encouraging. If such a revolutionary treatment reaches the market, it will require the collaboration of the researchers, WMU, and a corporation that sees the potential in making a new product that will meet a market need. WMU and Essani have collaborated with Viron to file a patent on the viral gene sequence and novel protein, entitled “Nucleic Acid Molecules and Polypeptides for Immune Modulation,” U.S. patent No. 6894155. Viron and WMU also entered into an agreement whereby Viron obtained commercial use rights for the patented technology and WMU obtained the right to receive future royalties from Viron.

Colorectal cancer is the second-most common cancer in women and the third-most common cancer in men, worldwide. For patients with advanced stage colorectal cancer, the five-year survival rate is less than 20 percent. Cancer cells have the ability hide from the body’s immune system, allowing the cancer to grow instead of being eliminated. Another avenue of research conducted in Essani’s laboratory has been to create a recombinant tanapox virus that can mobilize the body’s immune system to fight cancers. The recombinant tanapox virus specifically infects cancer cells and tags the cancer cells with a marker that directs the body’s immune system to attack these cells. Animal studies have shown that this recombinant virus  significantly shrinks colorectal cancer tumors.  WMU has recently filed worldwide patent application for this oncolytic virus technology.

All of this research will progress until somewhere in the future doctors will hopefully write prescriptions for a new, useful medical treatment based on Essani's work.