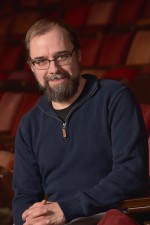 Lofton Durham (Lofty)
Associate Professor, Theatre History
Office:
(269) 387-3308
Send an email
Location:
1109 Gilmore Theatre Complex, Mail Stop 5460
Mailing address:
Department of Theatre
Western Michigan University
1903 W Michigan Ave
Kalamazoo MI 49008-5360 USA
Bio:
Dr. Lofty Durham is a teacher, scholar, and professional director.
For the Department, he teaches theatre history, script analysis, and script analysis for production. He is the 2015 recipient of the College of Fine Arts Excellence in Teaching Award. As a member of the graduate faculty of the WMU Medieval Institute, he also teaches occasional seminars in medieval performance, which is his main area of scholarly expertise. His work seeks to reframe the cultural importance of performance in late medieval France. He is a frequent contributor to conferences, including a perennial appearance as the co-convenor of a working group on medieval performance at the American Society of Theatre Research. He has been published in Journal of Dramatic Theory & Criticism, ROMARD, Studies in Medieval and Renaissance Teaching, and Oxford Bibliographies Online. He currently serves as the Assistant Editor of the journal Comparative Drama.
As an enthusiastic advocate of broad-based liberal arts education and its importance on a public university campus, he was instrumental in founding WMU’s University Center for the Humanities, and he is always encouraging students to learn languages, attend talks, read history, and otherwise maximize their time here to learn about the world.
Lofty earned his Ph.D., M.A., and a certificate in West European Studies at the University of Pittsburgh. While in Pittsburgh, he co-founded a small theatre company called Pandora’s Box Theatre, which during its short yet fierce existence produced a two-week repertory of new adaptations of Shakespeare’s Titus Andronicus and Molière’s Amphitryon, and a critically acclaimed translation and adaptation of Edmond Rostand’s “chicken play” Chanticleer. Previously, he directed at venues in the Pittsburgh and Washington, D.C. regions, including Open Stage Theatre, City Theatre, Pittsburgh Shakespeare in the Parks. Washington Shakespeare Company, Source Theatre Company, the Opera Theatre of Northern Virginia, The Theatre Conspiracy and St. Mary’s College of Maryland. He also assistant directed at the Folger Shakespeare Library’s Elizabethan Theatre for four years. At Western, he has directed or co-directed shows as diverse as Charlotte’s Web, Seven, the Mystery of Saint Veronica, and The Conviction of Lady Lorraine.
In addition to his academic and theatre experience, Durham has worked in nonprofit organizations as a volunteer manager, writer and editor, grant maker, fundraiser and marketer.
Facebook Twitter YouTube Instagram
Department of Theatre
Western Michigan University
Kalamazoo MI 49008-5360 USA
(269) 387-3220