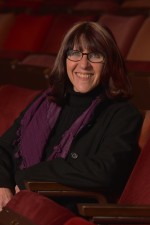 Dr. Joan Herrington is chair of the Department of Theatre at Western Michigan University. She is a contemporary theatre scholar whose research is focused on the pedagogy and practice of theatre in the last twenty years. She is the author of four books that examine the creative process of playwrights and directors. Herrington has also written more than a dozen book chapters and journal articles appearing in Journal of Dramatic Theory and Criticism, American Drama and The Drama Review and she served as editor of the prestigious publication, Theatre Topics. Through her research and practice, she has explored modern theatre around the world and engaged theatre artists from Japan to Great Britain to Nigeria.

Herrington has taught workshops at many universities and her work as a director and dramaturg has taken her from coast to coast with productions in New York and Los Angeles and as far as the Edinburgh Festival in Scotland. Most recently, she served as the dramaturg for Unison, a new theatre piece created by Universes and based on the unpublished poetry of August Wilson.  Unison premiered at the Oregon Shakespeare Festival in the spring of 2017.  Additionally, she has produced several feature films and continues to advise in local film production.